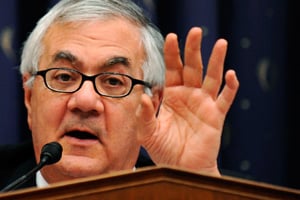 On Wednesday, we reported that 18 recipients of TARP funds were not paying dividends on the government's investment. Among those banks is one that got money thanks to help from Rep. Barney Frank, D-Mass.

Frank, the chairman of the House Financial Services Committee, wrote a provision into the $700 billion TARP bill that essentially guaranteed help for Massachusetts-based OneUnited Bank. Frank told the Wall Street Journal in January that he'd added the section because OneUnited, which owned a large amount of Fannie Mae preferred shares, had suffered large losses after government took over Fannie. As he told the Journal, "I did feel that it was important to frankly try and save them since it was federal action that put them into the dumper."

So even though OneUnited might not have qualified for a program reserved for "healthy" banks, it got $12.1 million anyway — only two months after the bank was scolded by regulators for poor lending practices and executive perks (such as a Porsche). After paying the Treasury a $94,000 dividend in February, the bank missed its May payment. OneUnited did not return a call seeking comment.

Frank's spokesman Steve Adamske told us the fact that OneUnited might be struggling again didn't change the original rationale for the investment. Not only was the bank hurt by the government takeover of Fannie Mae, he said, but OneUnited was "one of few if any other African-American-owned banks serving African-Americans in New England. That was the central reason he did this."

Frank wasn't the only lawmaker the bank had as an ally. Rep. Maxine Waters, D-Calif., whose husband held shares in the bank, arranged a meeting last September between regulators and the National Bankers Association, whose chairman was the general counsel of OneUnited. Treasury officials told the New York Times that OneUnited's CEO, who was also present, used the occasion to request a $50 million bailout.

The language in the TARP bill (passed only weeks after that meeting) set out three criteria tailored to OneUnited's condition. The "Secretary [of the Treasury] shall take into consideration ... providing financial assistance to financial institutions," the bill reads, that 1) have assets under $1 billion, 2) were at least adequately capitalized under regulatory guidelines as of June 30, 2008, and 3) owned preferred shares in Fannie Mae or Freddie Mac and were significantly hurt by the takeover. The bill emphasizes that institutions "serving low- and moderate-income populations and other underserved communities" should be given consideration.

It's unclear if any other of the 657 banks to receive funds through the main bailout program have also met these criteria. Frank's spokesman could not name one.