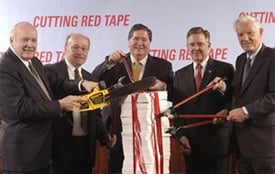 It might strike you as problematic that a regulator be sought after by big business. But to the Office of Thrift Supervision (OTS), it was just a testament to their customer service.

To get under OTS’ wing, all a company had to do was buy a small savings and loan. That’s what AIG did nine years ago. As ProPublica reported earlier this month, the OTS official who led the unit that oversaw AIG now says that he missed the possible impact of AIG’s dealing in credit-default swaps. Those swaps eventually sank the company.

This weekend, the Washington Posttook a hard look at OTS and how it did in its core responsibility: overseeing S&Ls that focus on mortgage lending. Given the roster of major players it oversaw (Washington Mutual, Countrywide, IndyMac, Downey Financial), you can guess the Post’s conclusion. It’s an eye-opening account of how a regulator that referred to the banks it oversaw as "customers" aimed to allow them to "operate with a wide breadth of freedom from regulatory intrusion."

Perhaps the most vivid demonstration of the deregulation-happy philosophy at OTS is the photo above from 2003; the heads of OTS and the FDIC pose along with banking industry representatives. Then-OTS chief James Gilleran is the one with the chainsaw.

One episode in particular demonstrates OTS’ shortcomings. In late 2005, the Office of the Comptroller of the Currency (OCC), one of the four main federal regulators of banks, made a move to crack down on reckless subprime lending. It was a simple and commonsensical idea: Mortgage lenders should make sure that borrowers could afford their monthly payments on adjustable-rate loans after the rate reset from its lower teaser level. OCC wanted the regulators to issue a joint proposal.

OTS head John Reich pushed back, arguing that the thrifts had "demonstrated that they have the know-how to manage these products through all kinds of economic cycles." So for months, the proposal went nowhere, languishing "until September 2006," reports the Post, "when it was swiftly finalized after a congressional committee began making inquiries."

OTS’ deregulatory approach proved so attractive that companies essentially regulator-shopped. AIG wasn’t alone among major international companies that made the move to OTS. Besides AIG, other companies with thrifts under the OTS include General Motors, General Electric and some parts of the investment banks Merrill Lynch, Lehman Bros. and Morgan Stanley.

In 2006, Countrywide reorganized itself as a thrift, trading the OCC for the OTS as its regulator. The reason, a former Countrywide exec tells the Post, was that the OTS would be "more lenient." An example: The OCC and the Fed prevented large banks’ loan officers from being involved in selecting property appraisers. Such involvement might prevent an honest, accurate appraisal. "But the OTS sold themselves on having a more liberal interpretation of [the restriction]," the executive said.