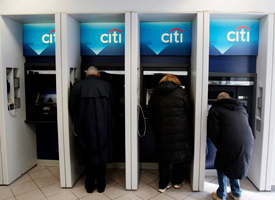 Given the current economic climate, it's not much of a surprise that the nation's banks are lending less. But here's a sad verdict on the TARP: According to a Washington Post analysis, banks that have received the Treasury Department's billions are lending less on average than banks that didn't get taxpayer money.

To be precise, a recent Federal Reserve analysis found that the volume of loans at banks fell about one percent in the last three months of 2008. The Post found a decline "more than twice as large" among TARP participants. (As always, you can see a complete list of all the companies that have gotten a piece of the bailout here.)

How'd this happen? The program is voluntary, and the Post reports the strongest banks have tended not to participate. "Rather than investing in the banks best equipped to increase lending, the government invested disproportionately in banks that needed money to solve problems." The Treasury Department insisted with mantric repetition that only "healthy banks" would get in the door, but things have been nowhere near that simple: Plenty of ailing banks slipped through.

There also seem to be plenty of examples of banks that met the technical definition of "well capitalized," and so were deemed healthy enough to get TARP funds, but are hobbling along. The Post finds a number in the Washington, D.C., area. In the case of EagleBank of Bethesda, Md., bank officials explain that they'd love to expand their lending, but for now, they're forced to turn customers away. The $38.2 million of TARP funds, part of which helped Eagle gobble up a failing competitor, isn't doing the job. The real trouble, the Post reports, is that the bank's deposit base is actually shrinking.

As the Wall Street Journalreported last week, the biggest bailout investments have faired no better. Behemoths like Citigroup ($45 billion in TARP money), Bank of America (also $45 billion) and JPMorgan Chase ($25 billion) all saw loan volumes decline in the fourth quarter of 2008.

The biggest decline, 3.1 percent, was at Citigroup. Undeterred, Citi put out a press release this morning trumpeting its consumer and business lending efforts in a new report titled "What Citi is Doing to Expand the Flow of Credit, Support Homeowners and Help the U.S. Economy."

Citi plans $36.5 billion in new initiatives, mostly new mortgage loans, which it says "are consistent with the objectives and spirit of the Treasury program." Not mentioned in the release is the fact that the report was required by the U.S. Treasury as part of the November agreement to give Citi an additional $20 billion (after the first $25 billion invested in October) and backstop a $300 billion pool of the troubled bank's risky assets. So far, Citi is the first institution to submit a report on how it's using the TARP investment.

Next week, Tim Geithner is expected to roll out how the Obama administration will use and administer the second $350 billion installment of the TARP. It's expected that more investments in the nation's banks will be a part of that plan. Will he have a better formula? Stay tuned.