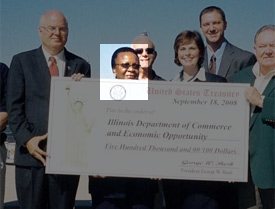 And the names keep rolling in.

Earlier this week, Rep. Jesse Jackson Jr. was all but confirmed as the "Senate Candidate 5" named in the criminal complaint against Illinois Gov. Rod Blagojevich.

Then, citing a "source familiar with the complaint," the AP yesterday reported "Candidate 4" is Illinois Deputy Governor Louanner Peters. The FBI allegedly recorded Blagojevich saying he’d pick "Candidate 4" to fill Barack Obama’s Senate seat if nobody else ponied up dough.

Well, it turns out Peters is no newcomer to controversy: We spoke with the Washington, D.C., Recorder of Deeds, which confirmed that the IRS slapped Peters with a federal tax lien in 2002. Peters held the tax debt, worth $21,547, until March 2007, four months after Blagojevich promoted her to be one of two deputy governors in his administration.

The criminal complaint against Blagojevich identified "Senate Candidate 4" only as a "deputy governor." The complaint does not accuse Jackson or Peters of any wrongdoing.

Last month, Blagojevich was allegedly recorded telling his chief-of-staff and now co-defendant John Harris that he was considering appointing Peters to the Senate. Blagojevich was reportedly recorded saying that if he were impeached, he could "count on [Senate Candidate 4], if things got hot, to give [the Senate seat] up and let me parachute over there."

Harris replied, "You can count on [Senate Candidate 4] to do that."

Blagojevich had been counting on Peters since early on in his administration. She joined his team in 2003 and has been his deputy chief of staff for social services and his deputy campaign manager.

Peters was named deputy governor in December 2006 and now makes $135,199 annually, according to a database compiled by the Better Government Association, a nonpartisan watchdog group.

âI think itâs difficult for someone who gets their salary off tax dollars to not pay her own taxes,â state Democratic Rep. Jack Franks told ProPublica.

But Peters’ tax problem apparently didn’t discourage Blagojevich from hiring Peters – and then promoting her.

A Blagojevich spokeswoman, Abby Ottenhoff, told the Chicago Sun-Times in May, "When Ms. Peters joined our administration in 2003, she was in the process of repaying taxes owed from previous years. She properly disclosed it in the interview process, and the debt has been paid in full."

The tax issue was not Peters’ only alleged indiscretion. In 1997, while she was chairing the Washington Convention Authority in Washington, D.C., a government audit attacked her for allegedly misusing the agency's credit card to buy personal items. She later reimbursed the authority, according to a 1997 Washington Post article (available only in their paid archives).

We called the governor’s office (yes, he is still the governor) to speak with Peters, and we’ll post an update if we hear back.