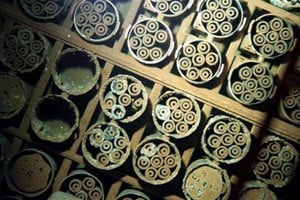 DOE describes Hanford as the world's largest environmental remediation project. In addition to the remnants of nine plutonium reactors, Hanford holds 4.6 million pounds of irradiated uranium fuel rods and 53 million gallons of radioactive waste buried in underground tanks, some of which have leaked into the groundwater and are moving toward the Columbia River. Radiation has long been the dean of hazards at nuclear cleanup sites, but in April 2009, the Hanford Advisory Board, a group chartered by DOE that includes current and former Hanford workers, medical specialists, environmental and worker-safety advocates, and local government officials, wrote a letter advising the department that "from a worker safety perspective ... beryllium currently rates as a greater hazard than radiation." The letter included a disquieting calculation: Studies have found that between 2 percent and 6 percent of people exposed to beryllium will become sensitized or develop CBD. At the time of the letter, 115 of 4,583 tested Hanford workers were sensitized or had CBD. Assuming the monitored employees are representative of the work force, the numbers imply that between 42 percent and 100 percent of Hanford workers have been exposed to beryllium.

Keith Smith, a retired Hanford mechanic and now a member of the board, said that DOE representatives at Hanford "challenged the math at first, but after studying it a bit, they decided it was correct." Steve Bertness, a DOE industrial hygienist at Hanford who specializes in beryllium, argued that the calculation unfairly extrapolated from a sample of workers to the entire Hanford population.

Medical experts say some people get chronic beryllium disease at exposure levels well below the federal safety limits used at nuclear cleanup sites. Dr. Lisa Maier, head of the occupational and environmental sciences division at National Jewish Health, in Denver, conducted research with colleagues in which chronic beryllium exposure at the eight-hour limit set by DOE -- 0.2 micrograms of beryllium dust per cubic meter of air: roughly a pencil tip in a box 80 feet tall and the size of a football field -- was not protective of many people. In fact, it was the median exposure for those who became sensitized or developed CBD. Maier said she stopped seeing the disease only at exposures of one-tenth of the federal limit or lower, but even that finding isn't necessarily reassuring. "Does that level protect 100 percent of people? We don't know," she said. "We're starting to find that some people are genetically at increased risk for beryllium sensitization and disease."

Beryllium has a deep history at Hanford, from its part in capping nuclear fuel rods prior to 1987, when the last reactor closed, to its former use in non-sparking tools, which still turn up at the site. DOE officials once hoped that examining historical beryllium records at Hanford would highlight all the areas of potential danger. But "some records are not as complete as others," said Bill McArthur, deputy director of the Office of Health, Safety and Security (HSS). Air and surface testing programs have been unable to pinpoint some sources. "It would be nice if we could say, 'Yes, we know that there was a beryllium project back in the 1970s or 80s, and that's where our cases seem to be coming from,'" said Paul Wambach, an HSS industrial hygienist. "But we don't really have that at Hanford, so this leaves open that our exposure monitoring is missing something."

According to Hanford data submitted to HSS, employees who've been sensitized or have CBD include not only the trade workers tearing down old plutonium processing buildings but also administrative employees whose work is largely confined to desks -- a testament to the mobility of beryllium dust. In one CBD case documented in medical literature, a woman's only exposure to beryllium was thought to be via the clothes that her husband brought home from work. Beryllium dust appears to be the cockroach of safety hazards. Wipe samples have found it in areas far more varied than historical operations would suggest, including overhead cranes, circuit breakers and ventilation ducts.

Because beryllium dust travels so readily, declaring a facility clean based on records indicating the absence of prior beryllium work -- a practice the HSS inspectors were informed of and noted in their letters -- is potentially dangerous in the absence of rigorous new testing. And many buildings have not undergone such testing. Fluor Hanford, a prime contractor from 1996 until phasing out last year, declared buildings clean based on tests that a 2004 DOE report said "avoided selection of locations likeliest to have contamination."