At least radiation can be measured in real time with a Geiger counter, so workers can quickly steer clear of hot spots. Beryllium samples must be collected and sent to a lab, and only later do workers find out if they were at risk. In 2000, according to Hanford sampling data obtained by ProPublica, a toolbox used by Craig Hall, who was a Hanford electrician before he became too sick to work, was tested for beryllium dust. Four separate 100-square-centimeter areas of the toolbox were wiped and the contents analyzed. The results underscore the difficulty of locating beryllium: Three of the wipes turned up essentially nothing, but the fourth, from the top right tray of the box, contained beryllium dust far in excess of the federal safety limit.

As with most workers, the precise sources and extent of Hall's exposures remain unclear. Hall remembers that the toolbox was tested, but said he was never told the exact results until ProPublica presented them. "All they said was that the toolbox is all crapped up, and then they took it away," he recalled. By February 2007, Hall was too fatigued from CBD to work and was granted medical removal, which included two years' pay, lifetime coverage of all CBD-related medical expenses, and a lump sum of $150,000. But, said the 58-year-old Hall, "I've got chronic beryllium disease. It could be $500 million and it wouldn't mean shit."

Given that levels of beryllium dust can vary so greatly just inches apart in the same toolbox, it has proved extremely difficult to find dust weighed in thousandths of milligrams on a work site with half the land mass of Rhode Island. For decades, as the dust was spread around Hanford, the government wasn't even trying to keep up. Beryllium, prized for being lighter than aluminum yet stronger than steel, was simply too useful.

Declassified Atomic Energy Commission (AEC) documents from the 1940s show an unequivocal awareness of the toxicity of low doses of beryllium -- and an intense desire to keep the issue under wraps. A 1947 commission report warns of "public indignation" should stories of sick workers hit the media. "This might seriously embarrass the AEC," the report reads. A declassified 1953 report by a Hanford industrial hygienist raised alarm about cases in which people who lived within a mile of a Massachusetts beryllium plant got CBD. "The exposures [that led to disease] have been low," the report warned. But it took four decades before the federal government moved to protect workers.

In 2000, with undeniable cases of CBD cropping up at nuclear facilities, the government enacted a beryllium safety regulation. Known to workers simply as "the beryllium rule," it set an "action level" of 0.2 micrograms per cubic meter of air averaged over an eight-hour day, above which exposure must be reduced. The beryllium rule went into effect months after the Toledo Blade conferred upon the government the embarrassment the AEC had dreaded in 1947. The Blade revealed that, for decades, the DOE had partnered with Cleveland-based Brush Wellman Corp., the chief supplier of beryllium to the government, to quash concern about beryllium disease and to oppose efforts by the federal Occupational Safety and Health Administration to strengthen exposure standards. OSHA adopted the exposure limit of 2.0 micrograms per cubic meter of air in 1970, and still uses that standard today, even though it was long ago proven unsafe. Some of OSHA's own inspectors have become sensitized to beryllium. 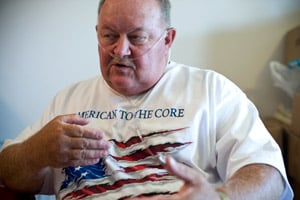 In April 2000, then-Energy Secretary Bill Richardson apologized on national TV for a half-century of government misbehavior toward beryllium risks: "Priority one was production of our nuclear weapons," Richardson said. "[The] last priority was the safety and health of the workers that build these weapons." That statement could easily have been extended to those who began cleaning up after those weapons. Former Hanford workers like Tom Peterson, 57, an ironworker who has CBD, recall being teased by safety managers as "beryllium brats" if they slowed down work to request respirators before entering areas of potential contamination. Peterson, once a hunter and long-distance runner, is now down to 33 percent of the lung capacity expected of a man his size and age. He is connected to a portable oxygen-pumping machine 24-hours a day. His wife, Janet, who quit her job as a legal assistant to care for him full time, can only watch as he wastes away. "It's a death sentence for me," Peterson said.

Last year, a coalition of workers and DOE representatives hashed out a new, improved "chronic beryllium disease prevention program" covering all Hanford contractors and subcontractors. A goal was to standardize safety efforts across the site and mark not only buildings with a known beryllium hazard but those that haven't been cleared based on extensive testing. Workers said the plan is a huge step forward. And yet, Hanford employees involved in implementing the program said that, months after the planned Jan. 1 start date, provisions aren't uniformly in place. "Some buildings are being reassigned [as potentially contaminated] and some are not," according to one employee, who said he has seen new workers enter areas marked for potential beryllium contamination without protection.

A February letter from the Hanford Advisory Board to DOE raised concern about delays "given the serious nature of the potential risk to workers." The letter also noted safety steps that DOE is not taking. "The simple questioning of sensitized employees on their work history to determine potential undiscovered sources of beryllium is still not happening," the letter reads. Hanford's beryllium program, the board wrote, "seems to lack a sense of urgency."

Washington Closure Hanford, one of the major site contractors and a company owned jointly by CH2M Hill, Bechtel National and URS Corp., was granted an extension by DOE and now has until Sept. 21 to fully implement the new beryllium program.

Current, longtime Hanford workers said lax attitudes toward CBD result in part from the unpredictable course of the disease. Because CBD can appear quickly following exposure, or take years or even decades to manifest, no one can say for certain when or how often an ill individual was exposed. Some Energy Department officials at Hanford suggest beryllium contamination is largely a thing of the past. "It's possible that [sick workers] got their exposure before we had a better understanding of beryllium like we do now," said Bertness, the DOE industrial hygienist. He suggested some workers with CBD might not have been exposed at Hanford. "It can also happen from naturally occurring beryllium [in soil]," he said, "so these people could be gardeners at home." However, beryllium researchers agree that naturally occurring beryllium — beryllium silicate — is not as dangerous as the industrial version — beryllium oxide. In one study, miners did not become sensitized despite extensive exposure to natural beryllium. Several medical experts told ProPublica that naturally occurring beryllium does not cause CBD.

Workers who operate in known contamination areas are screened at least annually with a beryllium lymphocyte proliferation test, or BeLPT. In the test, a worker gives blood that is then exposed to beryllium. If the white blood cells react strongly enough, the worker is deemed sensitized and at risk of CBD. Those who test negative are free to work beryllium jobs. But the test provides little solace: It has a false negative rate of about 32 percent, according to a 2004 paper in the American Journal of Industrial Medicine, and a false positive rate of about 1 percent, meaning workers are far more likely to be improperly cleared than improperly restricted. Some workers test "borderline" – unclear whether they are negative or positive. One Hanford worker who was recently tested said some employees who tested borderline have been cleared to work in potential beryllium areas without additional testing to verify their status.