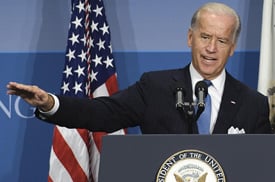 Vice President Joe Biden marked the 200-day point of the stimulus package today with a speech at the Brookings Institution, where he spent nearly an hour ticking off its achievements so far. Among other things, Biden said some economists had given the $787 billion stimulus bill credit for creating 500,000 to 750,000 jobs and boosting the gross domestic product in the two most recent quarters.

The administration has benefitted from rosy economic numbers in recent weeks. The Federal Reserve, in minutes released Wednesday night, credited the stimulus with playing a role in stabilizing the economy. But any assessment of the stimulus, particularly when it comes to predicting jobs created or saved, relies on some economic guesswork.

Biden seemed to acknowledge that, saying it was “above my pay grade” to try to predict what the ultimate effect of the stimulus bill might be. His main point was that the White House had met or exceeded its goals made 100 days ago, when he said the administration would “accelerate” stimulus spending this summer.

We wondered whether the stimulus is meeting the larger goals set out when it passed in February. They include helping the neediest, preventing waste, fixing crumbling infrastructure and creating or saving jobs. Here’s some context for Biden’s remarks on those points:

Trajectory of the Economy

Biden was careful to refrain from giving the stimulus bill too much credit, but he did say it played a significant role in “changing the trajectory” of the economy toward recovery. “The Recovery Act isn't the horse that's carrying the whole sleigh,” he said, “but it's pulling its weight.”

He cited a recent report by Goldman Sachs that credited the stimulus for boosting GDP in this quarter to a 3.3 percent annualized rate, up from gloomier estimates earlier.

“What nobody knows is what would have happened if we hadn't done the (stimulus),” said Nigel Gault, chief U.S. economist at IHS Global Insight. “How much difference would it have made, for example, to state and local government spending if they hadn't had transfers from the federal government? What would have happened to consumer spending if we hadn’t increased transfer payments to the unemployed, cut withholding taxes, and if we didn’t have the one-time payments to the seniors?”

Biden said the stimulus help for states saved 135,000 education jobs and 5,000 law enforcement jobs and that veterans and seniors benefited from getting one-time checks for $250.

He said some upcoming stimulus spending –on green energy and high speed rail, for instance – has the potential to transform the economy. But Gault said spending in those areas “wasn’t the biggest part of the (stimulus) package, or even close to it.”

Unemployment figures due out Friday are expected to show a slight uptick in the overall unemployment rate of 9.4 percent in July. The Labor Department said today that continuing unemployment claims rose to 6.23 million, up from 6.13 million.

In face of those numbers, Gault said one of the biggest benefits of the stimulus may be in building optimism. “Confidence was really important in taking the economy down,” he said. “It will be important in how much we grow in the future.”

(Our monthly check of optimism and other indicators in eight StimCities will update next week.)

The Dog That Didn’t Bite

Biden said skeptics early on predicted the stimulus might be derailed by stories of wasteful spending—“millions of dollars spent on polar bear tanks,” for instance. “That dog didn’t bite,” he said, meaning that those stories haven’t materialized.

Polar bear tanks aside, the government did allocate millions of stimulus dollars for tiger and lion cages at the National Zoo, as we reported in May. And the Florida Department of Transportation got $3.4 million to build tunnels for migrating turtles—a project praised by local residents but held up by Republicans as just the kind of wasteful-spending story the vice president wanted to avoid.

In July, we reported that more than $100 million in stimulus dollars were being spent on airports with fewer than one flight an hour, while many of the country’s busiest airports were getting nothing at all. Last month, the watchdog for the Department of Transportation did indeed bite, calling for a full audit of stimulus airport grants.

Last week, The Associated Press reported that some of the country’s busiest border checkpoints were getting no stimulus money while small checkpoints had been allocated millions of dollars. Among the checkpoints getting money – $199 million, or five times more than any other station – is one at Nogales, Ariz., the home state of Department of Homeland Security Secretary Janet Napolitano, the AP said.

According to Biden, one of the main goals of the Recovery Act was to “bring relief to those hardest hit by the recession.” But as ProPublica reported last month, a county-by-county breakdown of contracts, grants and loans showed no relationship between where the stimulus money is going and either unemployment or poverty.

“Some battered counties are hauling in large amounts, while others that are just as hard hit have received little,” Michael Grabell and Jennifer LaFleur reported, based on a statistical analysis.

The analysis did not include increased Medicaid spending, tax relief, food stamps or the boost in unemployment payments, because there is no county breakdown available. Those most certainly help the needier Americans, and the spending contributes to creating or maintaining jobs downstream in the economy.

However, the stimulus bill specifically calls for infrastructure funds to be directed at “economically distressed areas.” So far, at least, the numbers suggest that isn’t happening. States with higher unemployment are also spending and completing transportation projects more slowly, according to a stimulus spot check conducted by the ProPublica Reporting Network.

This week, the Treasury Department put out the first official estimate of how much money from stimulus tax cuts has rolled into the economy -- $63 billion out of an estimated $212 billion total in the bill. Our updated Stimulus Progress Bar reflects the new figure and other spending by category.

During the question-and-answer session, Biden said stimulus money is fixing the country’s aging infrastructure. He noted in particular the high number of bridges that are in desperate need of repair, citing the Interstate 35 bridge that collapsed in Minneapolis in 2007.

By contrast, there seems to be an emphasis on funding stimulus bridge projects that can be done quickly, rather than those with the greatest need. The AP reported last month that while nearly 2,500 bridges are getting stimulus money for repairs or improvements, nearly half of those bridges are in such good condition that they wouldn’t normally qualify for federal money.

A spokesman for the Texas Department of Transportation told the AP that the stimulus bill “was passed to put shovels in the dirt and money in people’s pockets”—a worthwhile goal but different from fixing bridges that are ready to collapse.

For details on what’s getting spent where, see our Recovery Tracker.