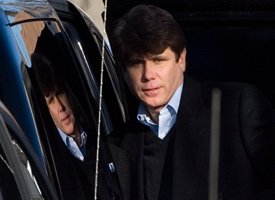 Earlier this week, we wondered whether Illinois Gov. Rod Blagojevich can tap his campaign war chest to pay for his defense against federal corruption charges.

The governor seems to think so. As various papers are reporting, Blagojevich plans to ask permission from the U.S. district court to use his campaign committee funds, totaling $3.6 million as of July.

"There's a real question about how he will be able to pay for his defense," Michael Ettinger, a lawyer for the campaign committee's chairman, told the New York Times. (By the way, that chairman is one Robert Blagojevich, the governor's brother.)

But not so fast, governor.

The U.S. Attorney in Chicago, Patrick Fitzgerald, sent the committee, Friends of Blagojevich, a letter this week warning that he is looking to freeze its funds. Fitzgerald's letter was clear: "Don't spend it or conceal it or dissipate it, we'll seek reimbursement if you do," Ettinger described in today'sChicago Sun-Times.

Of course, all that is assuming the case against the governor actually moves forward. Currently, Blagojevich has only been arrested and a criminal complaint was filed against him.

As we noted earlier, state law does not explicitly bar the Democratic governor from tapping the committee's funds to pay legal bills, even though he stands accused of illegally soliciting and obtaining some of the funds in exchange for official actions. Illinois generally follows the Federal Election Commission's rules that allow federal politicians to use campaign funds for defending charges related to being in office (PDF).

But Fitzgerald could indict the Friends of Blagojevich Committee itself, effectively putting a hold on the funds. Fitzgerald first used this tactic in the case of Blagojevich's predecessor, Gov. George Ryan.

Ettinger told the Sun-Times he expects Friends of Blagojevich will be indicted. Assuming that's the case, Ettinger plans to seek a hearing to have attorney fees set aside from the campaign.

And life keeps getting harder for Blagojevich.

On Wednesday, state Attorney General Lisa Madigan denied a request by Blagojevich's high-profile lawyer, Ed Genson, to have the state subsidize the costs for the governor's impeachment defense. After all, the charges against the governor stem from his role in state business, Genson reasoned.