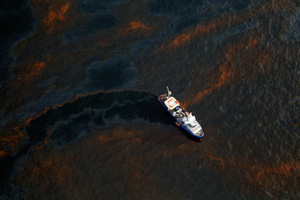 BP, the global oil giant responsible for the fast-spreading spill in the Gulf of Mexico that will soon make landfall, is no stranger to major accidents.

In fact, the company has found itself at the center of several of the nation's worst oil and gas–related disasters in the last five years.

In March 2005, a massive explosion ripped through a tower at BP's refinery in Texas City, Texas, killing 15 workers and injuring 170 others. Investigators later determined that the company had ignored its own protocols on operating the tower, which was filled with gasoline, and that a warning system had been disabled.

The company pleaded guilty to federal felony charges and was fined more than $50 million by the U.S. Environmental Protection Agency.

Almost a year after the refinery explosion, technicians discovered that some 4,800 barrels of oil had spread into the Alaskan snow through a tiny hole in the company's pipeline in Prudhoe Bay. BP had been warned to check the pipeline in 2002, but hadn't, according to a report in Fortune. When it did inspect it, four years later, it found that a six-mile length of pipeline was corroded. The company temporarily shut down its operations in Prudhoe Bay, causing one of the largest disruptions in U.S. oil supply in recent history.

BP faced $12 million in fines for a misdemeanor violation of the federal Water Pollution Control Act. A congressional committee determined that BP had ignored opportunities to prevent the spill and that "draconian" cost-saving measures had led to shortcuts in its operation.

Other problems followed. There were more spills in Alaska. And BP was charged with manipulating the market price of propane. In that case, it settled with the U.S. Department of Justice and agreed to pay more than $300 million in fines.

At each step along the way, the company's executives were contrite.

"This was a preventable incident. ... It should be seen as a process failure, a cultural failure and a management failure," John Mogford, then BP's senior group vice president for safety and operations, said in an April 2006 speech about the lessons learned in Texas City. "It's not an easy story to tell. BP doesn't come out of it well."

In a 2006 interview with this reporter after the Prudhoe Bay spill, published in Fortune, BP's chief executive of American operations, Robert Malone, said, "There is no doubt in my mind, what happened may not have broken the law, but it broke our values."

Malone insisted at the time that there was no pattern of mismanagement that increased environmental risk.

"I cannot draw a systemic problem in BP America," he said. "What I've seen is refineries and facilities and plants that are operating to the highest level of safety and integrity standards."

Nonetheless, Malone, who spent three decades at BP and was promoted to the CEO of BP America shortly after the Texas refinery blast, promised to increase scrutiny over BP's operations and invest in environmental and safety measures.

He told Congress that it was imperative BP management learn from its mistakes.

"The public's faith has been tested recently," he said. "We have fallen short of the high standards we hold for ourselves and the expectations that others have for us."

Time will tell whether the accident that killed 11 workers and sent the Transocean Deepwater Horizon drilling rig -- a $500 million platform as wide as a football field -- sinking to the bottom of the Gulf of Mexico was simply an accident or something else.

Malone, who retired last year, declined to comment for this article. A spokesman for BP was not available for comment.

Families of workers who died in the accident have already filed lawsuits accusing BP of negligence. Congress, as well as the Minerals and Management Service, the federal agency that regulates drilling in the Gulf, were already separately investigating allegations that BP has failed to keep proper documents about how to perform an emergency shutdown of the Atlantis, another Gulf oil platform and one of the largest in the world.

There are also indications that BP and Transocean, the owner of the Deepwater Horizon rig that burned and sank, could have used backup safety gear -- a remote acoustic switch that would stanch the flow of oil from a leaking well 5,000 feet underwater -- to prevent the massive spill now floating like a slow-motion train wreck toward the Mississippi and Louisiana coastline. The switch isn't required under U.S. law, but is well-known in the industry and mandated in other parts of the world where BP operates.

In the year before the accident, BP once again aggressively cut costs. A reorganization stripped 5,000 jobs from its payroll, saving BP more than $4 billion in operating costs, according to a report sent to ProPublica by Fadel Gheit, an investment analyst for Oppenheimer.

On April 27, as the U.S. Coast Guard worked with BP engineers to guide remote control submarines nearly a mile underwater in a futile effort to close a shut-off valve, BP told investors that its quarterly earnings were up more than 100 percent over the last year, beating expectations by a large margin. After underperforming its competition throughout the last decade, Gheit wrote, BP was the only major oil company to perform better than the S&P 500 last year.