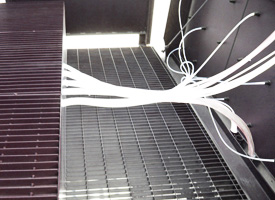 Stimulus money intended to expand broadband to underserved areas may be hamstrung by a technicality. The National Telecommunications and Information Administration, which oversees a $4.7 billion program to spread broadband Internet access, uses a definition of "underserved" that excludes cities, reports BusinessWeek. But cities are "among the places least reached by broadband," according to the article. Service is often unaffordable, and service providers could benefit from stimulus funding. An NTIA official said that all applicants should file applications and make the best case possible. The program alone will not meet the goal of broadband for everyone, he added.

The Project on Government Oversight reports that whistleblower protections and hotlines for stimulus fraud or abuse continue to lag in many states. POGO found that while 26 states offer some way of reporting stimulus corruption through their Recovery Act Web sites, finding or using those resources can be a challenge. Worse, only 11 states make available information on the rights of potential whistleblowers. The group cites Illinois' efforts as a standard for other states to follow.

The New York Times' Michael Cooper looks back at stimulus projects that caught the ire of politicians or the media and notes that one man's boondoggle is another's welcome investment. Cooper recites a list of oldies but goodies, including millions for a barely used airport in Ouzinkie, Alaska (first reported by ProPublica), tunnels for turtles in Florida, and a skateboard park in Rhode Island. For each project, he notes that what seems boondoggly from the outside is often welcomed by the community in question — whether Ouzinkie residents who depend on the airport, Floridians with big, amphibian-friendly hearts, or Rhode Islanders tired of seeing skateboarders on the steps of City Hall.

Cooper even reminds us of the provenance of the term "boondoggle": In 1935, a Brooklyn man was paid under the New Deal to teach jobless New Yorkers how to make boon doggles, a type of bracelet or necklace, resulting in a New York Times headline questioning the value of the investment. The term stuck as a label for wasteful government spending.