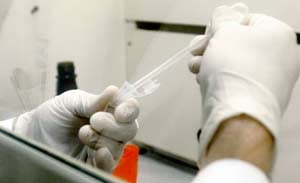 As California lawmakers tackle their state's $24 billion deficit, one little-known proposal on the table is a $20 million cut to the state crime lab.

That may not sound like much alongside the hundreds of millions in proposed slashes to the state's education, prison and health care systems. But it's half the lab's budget and would likely halt or delay the testing of rape kits, DNA and other crucial crime scene evidence in many counties, law enforcement officials warn.

The $20 million cut was approved by the state's budget committee last week and now goes to the entire legislature for approval. If it is passed, the lab would have to charge law enforcement agencies for tests it has always provided for free, even though many of those agencies are facing budget cuts of their own. Last year, the state lab tested evidence in about 50,000 cases, including more than 1,400 containing DNA.

Advocates for crime victims are urging lawmakers to reject the proposal, because they worry that delays in testing evidence will allow rapists, murderers and other violent criminals to remain on the streets.

"It's a public safety emergency," said Gail Abarbanel, who heads the rape treatment program at the Santa Monica-UCLA Medical Center. "The last thing that should be cut is public safety. I don't know what they're thinking."

Hundreds of police departments and district attorneys' offices in 47 of the state's 58 counties currently rely on the state lab to test their crime scene evidence. The other 11 counties, mostly concentrated in the Los Angeles and San Francisco areas, have their own labs to test forensic evidence.

But many law enforcement agencies in small or rural counties doubt they'll be able to afford the new charges, which are likely to run about $215 an hour. If the agencies can't pay, the lab will have to close some of its branches and lay off some of its scientists, said Jill Spriggs, the lab's bureau chief.

The agencies also could be forced to shelve thousands of DNA samples, bullet casings and other pieces of evidence used to identify violent criminals. There are already more than 350,000 untested DNA samples nationwide, according to federal government statistics.

Ultimately, some police chiefs said they might have to choose: pay to process evidence, or lose more cops on the streets. More than 1,000 police officers were eliminated statewide in the past year.

"I think that most law enforcement agencies would not be in a position to pay for those services," said Jerry Dyer, the police chief for the city of Fresno and past president of the California Police Chiefs Association. He estimated that the state lab's assistance to Fresno, which has some facilities of its own but relies on the state to process DNA evidence, amounted to approximately $1 million worth of testing last year.

Joe Grebmeier, a police chief from Greenfield, Calif., said his budget is already so tight that detectives are paying for crime scene supplies, including cameras, out of their own pockets.

"Decisions on how to proceed with investigations will now include, 'can we pay for it?'" said Grebmeier. "We might have to go to the public and have a fundraiser just to process a rape case."

Even in Los Angeles County, where the Los Angeles Police Department and the County Sheriff's Department have their own labs, DNA testing is in danger. Since May, the cash-strapped and understaffed Sheriff's office hasn't tested DNA evidence from thousands of rape and sexual assault cases, according to news accounts. State budget officials acknowledged the danger the cut poses but said it is needed to keep the state from plunging even deeper into debt.

"We have had to make many difficult decisions to close our budget gap this year," said Noreen Evans, D-Santa Rosa, chair of the Assembly Budget Committee.

Dan Carson, of the state legislative analyst's office, which has recommended (PDF) cutting the lab's funds for the last few years, agreed that "the easy choices are gone."

But Carson also defended the cuts, saying that it's unfair to allow 47 counties to get free services while others pay for their own crime labs. He said a state law already allows the lab to charge for testing.

"If this is a priority, one would assume they'll work out a way to do it."

But it could take years for a county to build its own lab or secure enough funding to pay the state. In the meantime, police and prosecutors could find it more difficult to send violent criminals to prison.

"Juries expect forensic evidence," said Spriggs, the state lab's chief. "When it's not there, cases could be lost."

Spriggs also noted that her lab "provides a very important service" to people wrongfully accused of crimes—those who rely on DNA testing to prove their innocence.

The proposed cut could go into effect between July 1 and Jan. 1, she said. It's unclear if it would be permanent. The entire state budget is likely to go to the full legislature for a vote on Wednesday.

When lawmakers debate the budget this week, Grebmeier, the police chief from Greenfield, suggested that they keep crime victims in mind.

"It's an academic discussion about these cuts and what we can afford and not afford until you look into the eyes of a victim or a family that's lost a loved one."

[In more coverage of this issue, ProPublica has been following five DNA labs to see just how well they're keeping up. The current backlog numbers at the five are recorded here (and in this chart). Every month, we will update you on each lab's progress – or lack thereof.]