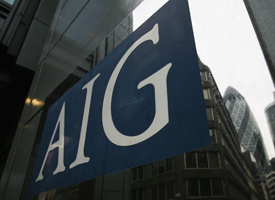 There's a lot to be mad at AIG about: the retention bonuses to executives, the secretive payments to banks and other counterparties, the risk-taking that nearly sank the company in the first place.

But shouldn't we relax? After all, isn't AIG going to pay it all back in the end?

That's the $180 billion question. AIG once said with certainty that the payback was no problem. Now, the company is hedging.

"We remain reasonably confident that we can repay what we have borrowed from the government," AIG spokeswoman Christina Pretto told ProPublica.

A growing chorus of analysts, experts and former AIG employees is questioning whether the government's current plans to sell off AIG's assets -- ranging from their profitable insurance subsidiaries to the art deco building near Wall Street -- will ever recoup the $49 billion in loans, and the other tens of billions of investments the public has poured into the hemorrhaging insurance company.

Perhaps the biggest problem: Potential buyers know AIG is in a corner, so they can play hardball.

"They are forced to sell assets but they are known to be a distressed seller, so it's hard for them to get a good, or even a fair price," said Cliff Gallant, an analyst who covers AIG for Keefe, Bruyette & Woods. "It's definitely going to be difficult for them to get what they want, for the government to get the loan repaid."

Complicating things, Gallant said, is that AIG employees are leaving in large numbers, further devaluing the business. "People are the franchise," he said.

Analysts have criticized those sales -- which netted about $1.1 billion -- as bad deals for AIG and taxpayers. They were a "drop in the bucket," said Rob Haines at CreditSights, in an interview with UPI. Meanwhile, AIG has struggled to sell other, larger assets.

Despite flogging them for months, the company failed to find buyers for its flagship subsidiaries -- the American Life Insurance Company and the American International Assurance Company, which operate overseas. When AIG announced record-breaking losses in early March, it handed some ownership of the two companies to the Federal Reserve Bank. In return, the Fed agreed to reduce the amount that AIG owed by up to $26 billion, giving AIG time to "review their divestiture options."

Pretto said "the reality of the market environment was the main driver" behind the revised plan.

AIG's former CEO, Maurice "Hank" Greenberg, has condemned the current strategy. Greenberg was forced to resign in 2005 amid an investigation of accounting improprieties at AIG. He remains a major AIG shareholder and is involved in litigation with the company.

"Fire-sale prices will bring taxpayers, who now own almost 80 percent of AIG, only pennies on the dollar for their investment in AIG," Greenberg wrote in testimony (PDF) last week to the House Committee on Oversight and Government Reform. "The largest asset sale to date [Hartford Steam Boiler] took place at a fraction of the asset's purchase price and at a small multiple of book value."

Even in good economic times, selling AIG would be no easy task. Analysts say it is one of the world's most complicated conglomerates, with more than 1,500 subsidiaries in more than 50 countries.

"There's no company that compares to the size and complexity and spread of different businesses as this company," said Joyce Sharaf of the insurance company rating agency, A.M. Best Co.

AIG's insurance subsidiaries are interconnected through an intricate web of agreements and guarantees that make them highly interdependent.

One of its largest property and casualty companies, National Union Fire Insurance Company of Pittsburgh, has "unconditionally and irrevocably" guaranteed to pump more than $17 billion into a dozen other AIG subsidiaries all over the world, if they need the money. Another U.S. subsidiary, the American Home Assurance Company, has promised up to $120 billion to other subsidiaries, according to company filings with state regulators.

AIG says it's trying to unwind some of the guarantees, which some analysts have criticized in past assessments of the company.

"The U.S. property and casualty companies guarantee the life operations," wrote three Deutsche Bank analysts in a controversial 2005 report that led them to downgrade their rating of AIG. "We are not sure how much sense that makes."

"AIG, the parent, is just a holding company and its strength and only source of cash flow to bondholders and shareholders comes from its subsidiaries," they wrote. Viewed on their own, few of the subsidiaries deserved their high ratings, according to Deutsche Bank, which no longer covers AIG. "We know that the domestic life operations ... were not AAA rated before their acquisition by AIG," the analysts wrote. Nor were several other large non-insurance companies, like the aircraft lending business for which AIG is reportedly seeking $5 billion from the Federal Reserve.

Now, taxpayers effectively have taken over those guarantees. If the government withdraws that support, it could jeopardize the ratings of many of those subsidiaries, according to Sharaf of A.M. Best.

"Government support is absolutely critical to the ratings," she said.

Former CEO Greenberg has made the same point.

"In my judgment, the current plan will not pay the taxpayer back," he told the House panel this month. "The primary objective should be to create conditions that allow AIG to repay the taxpayer of course, and rebuilding AIG is the best way of doing that."

Correction, April 9, 2009: This post originally stated that AIG "ditched plans" to sell two of its insurance subsidiaries, Alico and AIA. In fact, AIG says selling the companies is still an option in its effort to repay federal bailout loans. The company's plans did change insofar as AIG gave the Federal Reserve Bank ownership interest in the two subsidiaries in return for a $26 billion reduction in the amount owed to the Fed. The company is now considering a wider ranch of options than simply selling the subsidiaries. The original post also stated that the transaction resulted in an additional loan to AIG. In fact, the additional $30 billion lending facility, announced on the same day, came from the Treasury, not the Fed. AIG has not yet tapped that line of credit, according to spokeswoman Christina Pretto.