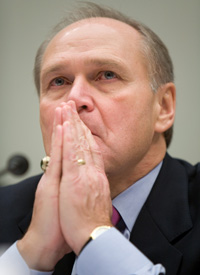 After that embarrassing private-jet snafu, it looked like the auto execs were finally going to start behaving like proper bailout supplicants.

Well, not exactly. A 9-hour drive to D.C. doesn't quite make up for the fact that Chrysler is refusing to let the government review its books.

Bloomberg News columnist Jonathan Weil reported yesterday that neither Chrysler nor its majority owner, Cerberus Capital Management LP, will disclose the details of the privately held auto company's most recent financial statements to Congress. It won't even hand over the identities of its board members.

Chrysler CEO Robert Nardelli did submit a 14-page business plan (PDF) to the Senate Banking Committee last week, but according to Bloomberg's Weil, it's disappointingly vague:

Not once did Nardelli disclose any of the historical information found on a customary set of financial statements. There was nothing about total assets or liabilities, year-to-date losses or cash flows, let alone pesky details like deferred compensation that might be owed to Chrysler executives.

A Chrysler spokesperson confirmed to Bloomberg that a longer presentation given to the committee, and kept under wraps, did not include the company's financial statements either.

Weil adds, "The summary starts out with so much blather about how well managed and innovative Chrysler is, you might wonder why it needs a bailout." Well, the Wall Street Journal reports today that some lawmakers are asking themselves just that: Why should the government bail out Chrysler if its own owner, Cerberus, won't?

Cerberus, which the New York Times has called "one of the world's richest and most secretive private investment companies," paid $7.4 billion for an 80 percent stake in Chrysler in 2007. It also employs former Treasury secretary John Snow, who has personally lobbied his successor, Hank Paulson, in favor of an auto bailout.

Sen. Chuck Grassley (R-IA) vowed to oppose a Chrysler bailout until Cerberus explains why it won't dole out the $8 billion needed to stabilize the company. Sen. Robert Corker (R-TN) said, "Cerberus has cash, lots of cash, that it is unwilling to put into this company."

But the Journal explains that it's not so simple:

Whether the company can pump money into Chrysler is more than a political calculation. Cerberus, which manages $27 billion across numerous funds, has contractual limits with investors about how much capital it can allocate to one deal -- less than 5%. And if Cerberus decided to exceed its position limits and invest more money in Chrysler, it could be viewed by the firm's investors as throwing good money after bad.

Cerberus has also promised to forgo any profits it makes if Chrysler recovers post-bailout.

Congressional Dem leaders and the White House finalized a $15 billion bailout proposal for the auto companies today, and it's unclear whether concerns about Chrysler's lack of transparency and Cerberus' hands-off stance will stall its progression through Congress. The House has scheduled a vote for later today.