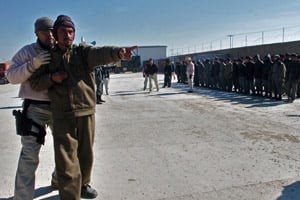 A recent Congressional Research Service analysis obtained by ProPublica looked at the number of civilian contractors killed in Afghanistan in recent months. It's not pretty.

Of the 289 civilians killed since the war began more than eight years ago, 100 have died in just the last six months. That's a reflection of both growing violence and the importance of the civilians flooding into the country along with troops in response to President Obama's decision to boost the American presence in Afghanistan.

The latest U.S. Department of Defense numbers show there are actually more civilian contractors on the ground in Afghanistan than there are soldiers. The Pentagon reported 107,292 U.S.-hired civilian workers in Afghanistan as of February 2010, when there were about 78,000 soldiers. This is apparently the first time that contractors have exceeded soldiers by such a large margin.

Using civilian contractors to haul food, prepare meals and act as bodyguards has kept the Pentagon's official casualty figures lower than they would have been in past conflicts, where contractors were not as heavily used.

Contractor casualties are, by and large, invisible to the public, disguising the full human cost of the wars in Iraq and Afghanistan. They are not reported in totals given by the government. If they were, the death toll in Afghanistan would have surpassed 1,000 -- 848 soldiers, 289 civilian contractors -- from 2001 to 2009, a milestone that has gone entirely unmarked.

The number of contractor dead are released only through the Labor Department, which keeps count as part of an insurance program for contractors known as the Defense Base Act. And these numbers, agency officials have admitted and our reporting has shown, undercount fatalities. As David Isenberg pointed out in the Huffington Post recently, a new database designed, in part, to track contractor deaths is still not being used to do so.