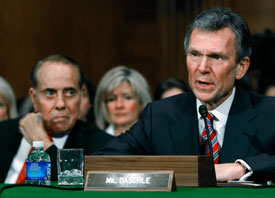 Tom Daschle is “deeply embarrassed and disappointed” that he botched his taxes, and today he’ll make his way to Capitol Hill to tell a panel of senators just how sorry he is. Having just confirmed another repentant tax botcher to run the IRS, the Senate will now weigh Daschle’s sin.

It’s not hard to imagine how Daschle might have messed up. Surveying the amazing array of consulting, speechmaking, fundraising and advising business Dachle got since losing re-election in 2004, work that won him more than $5.2 million, you can see how $134,000 in taxes might slip through the cracks.

Just try to keep it all straight: He got $2 million from InterMedia Partners for chairing the private equity firm’s advisory board, $2 million more from Alston & Bird, a white-shoe law firm with a booming lobbying practice (though Daschle was technically not a lobbyist), $220,000 in speaking fees from various health-care industry groups, spots on the boards of directors for a couple of ethanol companies, and a healthy helping of stock options from a variety of sources.

Yes, Daschle was a busy man. And the chaos seems to have gotten the better of him.

Almost all of the back taxes stem from Daschle’s work for InterMedia, run by longtime Democratic donor Leo J. Hindery Jr. Somewhere in the flurry of millions, InterMedia failed to report one of Daschle’s monthly payments – $83,000 – to the IRS. Daschle’s spokeswoman says that was a mere clerical error.

And then there’s the car and driver. Hindery provided Daschle with the use of his chauffeured limousine, which Daschle’s spokeswoman says he “naively” believed was “nothing more than a generous offer from a friend.” (Daschle used it to raise money for the firm, she said.) But Daschle’s naïveté seems short lived, because last June, according to the spokeswoman, he mentioned the generosity to his accountant.

It’s unclear what happened over the following six months, but finally in January, after Daschle’s nomination to be secretary of Health and Human Services, but shortly before he submitted his financial disclosure to the Senate, he paid up. He’s subsequently agreed to pay $6,000 more to cover Medicare taxes on the driver.

The final bit of back taxes stems from $15,000 in charitable contributions to an Indian reservation that lacks the IRS’s required paperwork. Put that all together with interest, and the toll is around $146,000.

But as much as Daschle will have to answer for his tax problems, equal attention should be given to his consulting and speechmaking. At Alston & Bird, Daschle advised a range of clients on government relations, activity that doesn’t appear to reach the legal definition of lobbying – directly contacting lawmakers or staff on behalf of that client.

As the New York Timesputs it, “Mr. Daschle has operated in the gap between the popular understanding and legal definition of a lobbyist.” Among those clients is a major health-care conglomerate, UnitedHealth. Add to that the list of twelve health-care interest groups (among them, America's Health Insurance Plans, $40,000 for two speeches, CSL Behring, $30,000, the National Association of Boards of Pharmacy, $16,000, and the Principal Life Insurance Co., $15,000), and you have a nominee weighed down by just the sort of potential conflicts of interest that President Obama bemoaned on the campaign trail.

But as we pointed out last week, Obama seems to have decided that his campaign rhetoric on special interests and lobbying set too high a bar.