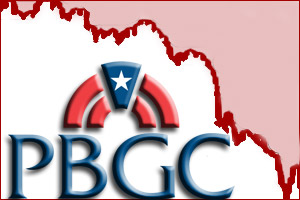 The Pension Benefit Guaranty Corporation announced today that it has the largest deficit in the agency's 35-year history. What was $11 billion in September has ballooned to $33.5 billion.

The PBGC is the victim of a double whammy: low interest rates and a sinking economy that is targeting industries with defined benefit plans. The PBGC estimates that about $7 billion of the deficit is the result of falling interest rates, which the agency uses to estimate how much money it will have in the future. In addition, as the economy falters, the PBGC is inheriting more pensions when companies file for bankruptcy or end their plans. The agency estimates that $11 billion of the deficit is due to "completed and probable pension plan terminations."

More failures are on the horizon. Some of the largest defined benefit plans are held by carmakers. The auto-sector pensions are underfunded by about $77 billion, of which $42 billion "would be guaranteed in the event of plan termination," according to the PBGC.

"The PBGC has sufficient funds to meet its benefit obligations for many years because benefits are paid monthly over the lifetimes of beneficiaries, not as lump sums. Nevertheless, over the long term, the deficit must be addressed," PBGC Acting Director Vince Snowbarger will tell the Senate Special Committee on Aging at a hearing today.

According to a report prepared earlier by the consulting firm Rocaton Investment Advisors, the agency could be unable to pay benefits in as little as 18 years. But that was based on the $11 billion deficit figure, not today's estimate. It's unclear what the time horizon is with the current estimate of the agency's liabilities.

Only about $3 billion of the new deficit estimate is from investment losses, the agency reports. As of April 30, the PBGC's investment portfolio consisted of 30 percent equities, 68 percent bonds and less than 2 percent alternatives, such as private equity and real estate.