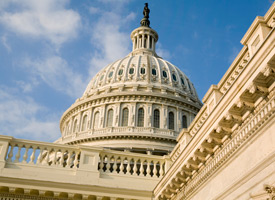 Not long after the administration decided to pursue a massive bailout plan, there were reports of a massive lobbying effort. Lobbyists for financial institutions were "swarming," the New York Timesreported. It was a "feeding frenzy," reportedUSA Today. Government watchdogs noted how the financial services industry had lawmakers firmly in its pocket after years of fetes and ample contributions.

But yesterday, the votes weren't there. And in today's post mortems on the bailout bill's surprising failure yesterday, much of the blame seems to focus on the bill's lack of real popular support.

But there was lobbying against it. On the Democratic side, "AFL-CIO President John Sweeney, who is bankrolling campaigns to aid Democratic candidates, condemned the plan." On the Republican side, "influential conservative groups such as the Club for Growth and FreedomWorks called for its defeat."

Meanwhile, by all accounts, lawmakers' offices were bombarded by phone calls from constituents urging against the idea. Rep. Nick Lampson (D-TX), who's facing a tight re-election battle, says his calls were 15-1 against the bill. He voted no.

Lawmakers were wary of going out on a limb to vote for an unpopular bill that none of the party leaders enthusiastically supported. The AP focuses on the 19 most vulnerable House lawmakers and finds that 13 of them voted against the bill, reporting that "lawmakers who had the most to lose risked the least on Monday." As one GOP lawmaker said, "People's re-elections played into this to a much greater degree than I would have imagined."

Those 13 crucial votes notwithstanding (the vote failed by 12), the vast majority of the 228 votes against the bill came from politically safe districts. According to a breakdown by the New York Times, 111 Republicans from "strong Republican districts" and 83 Democrats from "strong Democratic districts" voted no.

Ideological objections then could be said to account for the vast majority of the opposition. The bill "offered citizens from across the ideological spectrum a little something to hate," as the Washington Postputs it.

Some lawmakers are not convinced that a crisis is actually at hand. Liberals objected to the lack of foreclosure provisions in the bill, among other things; conservatives objected to the idea of a massive government intrusion.

The question remains of how the bill might finally work its way through Congress if the bill remains so unpopular. The way forward is unclear -- although the rebound of the stock markets this morning indicates that traders seem assured a bill will eventually pass. As House Minority Leader John Boehner says, "It's really amazing we got as many votes as we got."