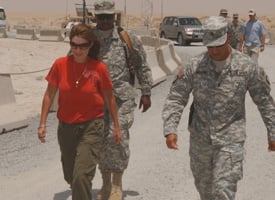 The McCain campaign has made much of Gov. Sarah Palin's role as commander in chief of the Alaska National Guard.

A spokesman claimed, now infamously, that "any decision that she has made as the commander of the National Guard that's deployed overseas, is more of a decision than Barack Obama has been making as he's been running for president."

The Alaska National Guard has served in a number of military operations overseas. They were deployed alongside Mongolian troops in Iraq, and worked at the Bagram Airbase in Afghanistan. They have also trained with Japanese troops in a program called North Wind 2008, and participated in the humanitarian Operation Pacific Angel in Cambodia.

But as a number of news organizations have pointedout, Palin was not in command of any of those operations.

So what exact role do governors play in overseeing National Guard units? And what incidents has the Alaska National Guard responded to while Palin has been in charge?

The president commands National Guard troops whenever they're deployed in federal missions, such as the wars in Iraq and Afghanistan. State governors only command the guardsmen in operations inside their states, traditionally in response to disasters like floods and fires.

According to Alaska National Guard spokeswoman, Kalei Brooks, in the two years of Palin's term, the National Guard has run 521 missions and saved 200 lives.

Major tasks, Brooks said, have been fighting wildfires and providing standby security during two meetings, including the International Whaling Commission (PDF) meeting in May 2007.

But even in state operations, Palin has a limited role. For big or unusual events, Palin authorizes the National Guard's actions, but for most run-of-the-mill work, Palin isn't involved at all.

Brooks explained that the National Guard works with other state security and emergency services, which each cover different geographical areas of the huge state. Each agency has a set of agreements that authorize them to respond automatically in an emergency, without needing the governor's specific authorization every time hunters get stranded in swamps, or Swedish tourists get stuck in the snow (PDF).

And while McCain spokesman Tucker Bound was correct when he told CNN that Palin, "makes the decision as to how to equip, how to command the National Guard in Alaska," the federal government, not the state, provides all of their equipment and material.

Brooks said the governor nevertheless plays an important role in managing the 3,850 Alaskan guardsmen. "Just because she's not in command, doesn't mean she's not involved," she said.

For instance, when Palin visited Alaskan guardsmen in Kuwait in July 2007 she asked about how their families were coping back home, according to Brooks.

"One of the things that came up was that a lot of these soldiers were from rural areas where subsistence hunting and fishing is very common," said Brooks. With their "primary hunter and gatherer" deployed in the Mideast, said Brooks, some families were going hungry. She added that common prey includes moose and caribou.

Palin arranged for exceptions to Alaska's laws on subsistence hunting licenses so that families "could have people hunt and gather for them while their husbands were away."