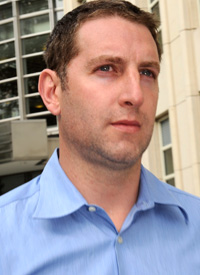 Here's another tale from the subprime meltdown. You may have heard about the so-called liar loans given to borrowers. Here's an example of potential lying much further up the chain.

Last week, the Justice Department charged Eric Butler and Julian Tzolov, two former brokers from Credit Suisse with securities fraud. The scheme they're charged with is straightforward: They told their corporate clients they were investing their money in federally insured student loans but instead were putting money into subprime mortgages.

In one case, according to an SEC complaint against the pair also filed last week, they used $20 million of a client's money to buy a security backed by mobile home loans. But in an e-mail to his client, Bulter changed the name of the security from "Greenpoint Credit" to "Greenpoint Student Assistance." (For those wanting an overview of how mobile home or subprime mortgages in general were dealt on Wall Street, check out This American Life's primer "The Giant Pool of Money.")

The SEC says that Butler and Tzolov, from Credit Suisse, sent more than 50 e-mails to clients that lied about the nature of the securities. (Staff were instructed to never use the term "mortgage" in e-mails to clients.) And the two made over $1 billion in unauthorized purchases. Why? Dealing in mortgage-backed securities won the pair much larger commissions, prosecutors say.

In a statement, Butler's lawyer Paul Weinstein told us that the investments the brokers sold were "triple-A securities," the highest credit rating. Prosecutors stress in the indictment that Butler and Tzolov had touted the security of investing in federally insured student loans, while secretly making riskier investments. (There has also been ample criticism of the credit ratings agencies for overrating mortgage securities, thus contributing to the subprime bubble.)

Butler's and Tzolov's scheme fell apart in August of 2007. The pair dealt in auction-rate securities, a type of investment vehicle where the interest rates are set at periodic auctions. In August of last year, auctions for subprime mortgage-backed securities began to fail.

The pair was unable to liquidate the investments, but initially tried to keep clients at ease. In one case, Butler allegedly told a client that an "administrative error" had prohibited the return of the client's principal. He then convinced the client to invest $25 million in another auction-rate security that wasn't backed by a student loan. The auction for that security later also failed, according to the SEC.

The pair's clients, many of them Israeli companies, were stuck with at least $817 million in securities, says SEC's complaint, "that they did not want to buy and are now unable to sell."

Weinstein, Butler's lawyer, said that Butler "believed he was doing the best for his clients, and they agreed, until the entire auction-rate securities market failed, which had nothing to do with him." He will fight the charges, Weinstein said. Tzolov, a Bulgarian native, was arrested at JFK airport last week.