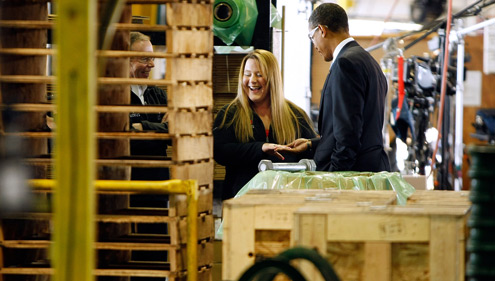 Economists and politicians have long been entwined in an awkward marriage of convenience.

Harry Truman was the first president with a council of economic advisers, but after every analysis ended with a wishy-washy "on the other hand," exasperation set in. Begged Truman: "Give me a one-armed economist!"

President Obama's claim that his stimulus plan will create 3 million to 4 million jobs is the latest clash of a politician's promises with the brute reality of economic imprecision.

The numbers are reassuring as political rhetoric, but will they hold up? For that matter, how solid are any of the job estimates swirling around versions of the $800-plus billion stimulus bills now in play?

Finding the answer plumbs the murkiest depths of the dismal science, a job that can be as messy as real plumbing.

It's not as simple as adding up how many jobs might come from building bridges or electric cars, as interest groups have done when lobbying for their programs. Economists instead look from the top down, using computer simulations of the economy that rely on a range of critical assumptions. Accuracy is measured in the millions of jobs -- a margin of error more fitting to astrology than science.

For the Obama camp to arrive at its estimates, forecasters had to guess at a few things: how much tax cuts and government spending will make the economy grow, and how much of that growth will result in jobs for you and me.

Those questions aren't easy to answer -- but economists have a tool to get there.

That tool is called a multiplier, a nifty device for making predictions. A tax multiplier, for example, tells you what a dollar in tax cuts amounts to in terms of economic growth. A government spending multiplier does the same -- with dollars that flow out of government programs.

Multipliers are handy, but they are also problematic. History is the only laboratory for developing them, and that creates certain limitations. The last time there was a large tax cut or surge in government spending, say the Reagan era or World War II, a lot was different about the U.S. economy. No Internet for one. No debit cards. No outsourcing. So the time period chosen when developing a multiplier tends to influence the results.

Studies of the New Deal or World War II era, two of the few periods that saw government spending ramp up anywhere near the degree Congress in contemplating, show a big economic return. But the stimulus package being hammered out now is unprecedented, in both dollars and as a share of GDP.

"We have to make a leap of faith that experiences of the past can be extrapolated to an amount of money that is so much larger," said James Albrecht, chair of the economics department at Georgetown University.

The House-passed stimulus package totals $819 billion in spending and tax cuts. Senate Democrats are pushing a plan that could reach nearly $900 billion.

The Obama administration's economists, including Christina Romer, president of the Council of Economic Advisors, are convinced that spending will pay off as it has in the past. Their analysis used a government spending multiplier of 1.6, which means for every dollar the government spends, the economy gets $1.60 in growth, a pretty healthy return.

By comparison, their multiplier for tax cuts is .99, which means a dollar in cuts results in less than a dollar's worth of economic impact.

It's not surprising, then, that the Democrats are proposing roughly twice as much government spending as tax cuts. Romer has said the reason Democrats included tax cuts at all is that they inject money into the economy faster than spending.

Even Romer conceded that her choice of 1.6 as a spending multiplier is something of a guess -- albeit an informed one. For instance, Robert Barro, a Harvard economist, has argued that by squeezing out private sector spending, government spending actually results in a net-loss multiplier of 0.8. And Douglas Elmendorf, director of the Congressional Budget Office, testified that a reasonable spending multiplier could be as high as 2.5.

Elmendorf's office did its own analysis of the bill that cleared the House and estimated the range of possible outcomes varies by a factor of three -- from 1.2 million to as many as 3.6 million jobs.

The same uncertainty exists when it comes to tax cuts.

Elmendorf said a tax cut multiplier could range broadly, from 0.5 to 1.7, in part because of the difficulty of predicting the behavior of wealthier taxpayers. They may be more likely -- or not -- to save the money rather than spend it, resulting in a less-immediate or small effect on economic growth.

That hasn't prevented Republicans from insisting that tax cuts are the best job creator.

DeMint cited his own historical precedent: tax cuts enacted during the Reagan years that he said pulled the country out of a recession. "Every time the United States has cut marginal tax rates, millions of jobs have been created," DeMint said.

Even after the recession has ended, when economists are armed with years more of data, the debate over the best kind of stimulus will not be settled -- at least among economists.

"We're never actually going to know what the effect of the stimulus is," said Nigel Gault, an economist at the prominent forecasting firm IHS Global Insight, "because we will never know what would have happened if stimulus had never gone through."