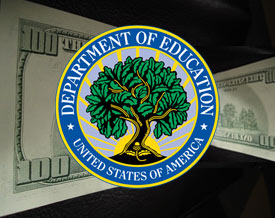 Some states are bending the rules that govern the use of the education stimulus dollars, according to a report released last week by the Department of Education’s inspector general. The report, which carried the deceptively bland title “Potential Consequences of the Maintenance of Effort Requirements under the ARRA Fiscal Stabilization Fund,” found that some states are using the program to reduce their own funding for public education.

While that may not violate the letter of the law when it comes to the program, the report says, it could undermine the Obama administration’s goal of using the stimulus to pay for education reform. The stabilization fund was intended to allow states to maintain their levels of education spending—and, if possible, to increase it, specifically by spending money on education reform.

According to the inspector general’s report, states can collect billions of dollars in stimulus funding for education, and still reduce their own overall spending on schools to 2006 levels. The flexibility in the program was designed to let states facing severe budget shortfalls, like California, avoid cuts to their total education funding. But according to the IG, even some states that can afford to spend their money on reform may not end up doing so.

The Department of Education responded to the IG report by saying that it “took steps to discourage states from reducing such support.” It said those steps included asking states to show, as part of their application for the $5 billion Race to the Top fund, whether their total education spending had gone up or down in 2009.