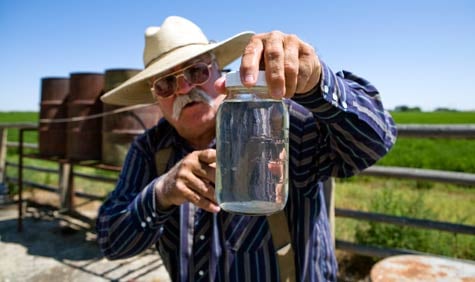 Federal environment officials investigating drinking water contamination near the ranching town of Pavillion, Wyo., have found that at least three water wells contain a chemical used in the natural gas drilling process of hydraulic fracturing. Scientists also found traces of other contaminants, including oil, gas or metals, in 11 of 39 wells tested there since March.

The study, which is being conducted under the Environmental Protection Agency’s Superfund program, is the first time the EPA has undertaken its own water analysis in response to complaints of contamination in drilling areas, and it could be pivotal in the national debate over the role of natural gas in America’s energy policy.

Abundant gas reserves are being aggressively developed in 31 states, including New York and Pennsylvania. Congress is mulling a bill that aims to protect those water resources from hydraulic fracturing, the process in which fluids and sand are injected under high pressure to break up rock and release gas. But the industry says environmental regulation is unnecessary because it is impossible for fracturing fluids to reach underground water supplies and no such case has ever been proven.

Scientists in Wyoming will continue testing this fall to determine the level of chemicals in the water and exactly where they came from. If they find that the contamination did result from drilling, the placid plains arching up to the Wind River Range would become the first site where fracturing fluids have been scientifically linked to groundwater contamination.

In interviews with ProPublica and at a public meeting this month in Pavillion’s community hall, officials spoke cautiously about their preliminary findings. They were careful to say they’re investigating a broad array of sources for the contamination, including agricultural activity. They said the contaminant causing the most concern – a compound called 2-butoxyethanol, known as 2-BE  – can be found in some common household cleaners, not just in fracturing fluids.

But those same EPA officials also said they had found no pesticides – a signature of agricultural contamination – and no indication that any industry or activity besides drilling could be to blame. Other than farming, there is no industry in the immediate area.

In Pavillion, a town of about 160 people in the heart of the Wind River Indian Reservation, the gas wells are crowded close together in an ecologically vivid area packed with large wetlands and home to 10 threatened or endangered species. Beneath the ground, according to the U.S. Geological Survey, the earth is a complex system of folded crusts containing at least 30 water-bearing aquifer layers.

EPA officials told residents that some of the substances found in their water may have been poured down a sink drain. But according to EPA investigation documents, most of the water wells were flushed three times before they were tested in order to rid them of anything that wasn’t flowing through the aquifer itself. That means the contaminants found in Pavillion would have had to work their way from a sink not only into the well but deep into the aquifer at significant concentrations in order to be detected. An independent drinking water expert with decades of experience in central Wyoming, Doyle Ward, dismissed such an explanation as "less than a one in a million" chance.

Some of the EPA’s most cautious scientists are beginning to agree.

"It starts to finger-point stronger and stronger to the source being somehow related to the gas development, including, but not necessarily conclusively, hydraulic fracturing itself," said Nathan Wiser, an EPA scientist and hydraulic fracturing expert who oversees enforcement for the underground injection control program under the Safe Drinking Water Act in the Rocky Mountain region. The investigation "could certainly have a focusing effect on a lot of folks in the Pavillion area as a nexus between hydraulic fracturing and water contamination." 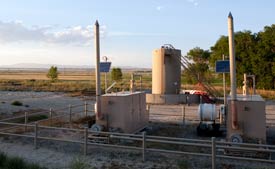 The Superfund investigation follows a series of complaints by residents in the Pavillion area, some stemming back 15 years, that their water wells turned sour and reeked of fuel vapors shortly after drilling took place nearby. Several of those residents shared their stories with ProPublica, while other information was found through court and local records. Several years ago, one resident’s animals went blind and died after drinking from a well. In two current cases, a resident’s well water shows small pooling oil slicks on the surface, and a woman is coping with a mysterious nervous system disorder: Her family blames arsenic and metals found in her water. In two of those cases, the Canadian drilling company EnCana, which bought most of the area’s wells after they were drilled and assumed liability for them, is either supplying fresh drinking water to the residents or has purchased the land. In the third case, a drilling company bought by EnCana, Tom Brown Inc., had previously reached an out-of-court settlement to provide water filtering.

Though the drilling companies have repeatedly compensated residents with the worst cases of contamination, they have not acknowledged any fault in causing the pollution. An EnCana spokesman, Doug Hock, told ProPublica the company wants "to better understand the science and the source of the compounds" found in the water near Pavillion before he would speculate on whether the company was responsible.

Precise details about the nature and cause of the contamination, as well as the extent of the plume running in the aquifer beneath this region 150 miles east of Jackson Hole, have been difficult for scientists to collect. That’s in part because the identity of the chemicals used by the gas industry for drilling and fracturing are protected as trade secrets, and because the EPA, based on an exemption passed under the 2005 Energy Policy Act, does not have authority to investigate the fracturing process under the Safe Drinking Water Act. Using the Superfund program gave the agency extra authority to investigate the Pavillion reports, including the right to subpoena the secret information if it needs to. It also unlocked funding to pay for the research. 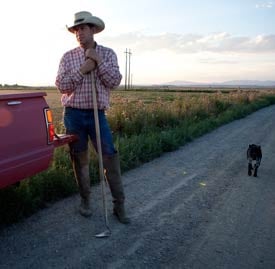 EPA officials have repeatedly said that disclosure of the fluids used in fracking – something that would be required if the bill being debated in Congress were passed – would enable them to investigate contamination incidents faster, more conclusively and for less money. The current study, which is expected to end next spring, has already cost $130,000.

About 65 people, many in jeans, boots and 10-gallon hats, filled Pavillion’s community hall on Aug. 11 to hear the EPA’s findings. They were told that a range of contaminants, including arsenic, copper, vanadium and methane gas were found in the water. Many of these substances are found in various fluids used at drilling sites.

Of particular concern were compounds called adamantanes, a natural hydrocarbon found in gas that can be used to fingerprint its origin, and 2-BE, listed as a common fracturing fluid in the EPA’s 2004 research report on hydraulic fracturing. That compound, which EPA scientists in Wyoming said they identified with 97 percent certainty, was suspected by some environmental groups in a 2004 drilling-related contamination case in Colorado, also involving EnCana.

EPA investigators explained that because they had no idea what to test for, they were relegated to an exhaustive process of scanning water samples for spikes in unidentified compounds and then running those compounds like fingerprints through a criminal database for matches against a vast library of unregulated and understudied substances. That is how they found the adamantanes and 2-BE.

An EnCana representative told the crowd that the company was as concerned about the contamination as the residents were, and pledged to help the EPA in its investigation.

Some people seemed confounded by what they were hearing.

"How in god’s name can the oil industry dump sh*t in our drinking water and not tell us what it is?" shouted Alan Hofer, who lives near the center of the sites being investigated by the EPA.

"If they’d tell us what they were using then you could go out and test for things and it would make it a lot easier, right?" asked Jim Van Dorn, who represents Wyoming Rural Water, a nonprofit that advises utilities and private well owners on water management.

"Exactly," said Luke Chavez, the EPA’s chief Superfund investigator on the project. "That’s our idea too."

Now that the EPA has found a chemical used in fracturing fluids in Pavillion’s drinking water, Chavez said the next step in the research is to ask EnCana for a list of the chemicals it uses and then do more sampling using that list. (An EnCana spokesman told ProPublica the company will supply any information that the EPA requires.) The EPA is also working with area health departments, a toxicologist and a representative from the Centers for Disease Control’s Agency for Toxic Substances and Disease Registry to assess health risks, he said.

Depending on what they find, the investigation in Wyoming could have broad implications. Before hydraulic fracturing was exempted from the Safe Drinking Water Act in 2005, the EPA assessed the process and concluded it did not pose a threat to drinking water. That study, however, did not involve field research or water testing and has been criticized as incomplete. This spring, EPA administrator Lisa Jackson called some of the contamination reports "startling" and told members of Congress that it is time to take another look. The Pavillion investigation, according to Chavez, is just that.

"If there is a problem, maybe we don’t have the tools, or the laws, to deal with it," Chavez said. "That’s one of the things that could come out of this process."