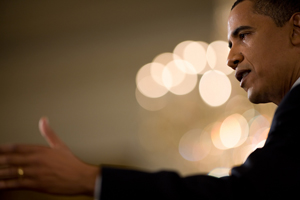 In President Barack Obama's news conference on Wednesday night, he said the $787 billion economic stimulus bill has already created or saved over 150,000 jobs. We decided to find out how the president arrived at that figure.

It turns out the feds don’t have a way to measure exactly how many jobs have been created or saved, so they use projections instead, and it's all rather academic.

The new estimate, like the original one predicting the stimulus bill would save or create 3 to 4 million jobs, came from the Council of Economic Advisers. To get the number Obama used, economists at the council simply prorated their earlier estimates based on stimulus outlays as of April 21.

As we've reported before, the administration's estimates are based on a guess at how much tax cuts and government spending will make the economy grow.

We asked Nigel Gault, an economist with the forecasting firm IHS Global Insight, about what he made of the administration's latest assumptions.

"The only thing they have to go on is how much money has been actually spent," Gault said. But that doesn't tell the whole story. The feds count the money that goes out the door. They don't have close tabs on what happens after that, he said.

"You have to ask, 'Has the money been effectively spent? Has it actually been spent in purchasing goods and services or whatever it was supposed to be purchasing?'" Gault said.

Gault noted that funding for larger projects probably won't be spent all at once. If a city or county starts work on a project, it doesn't hire every worker immediately.

State officials have a closer look at what's happening on the ground; the picture there is hardly clear.

About 50 jobs have been created to work on two projects in the state of New York -- road work in one county and culvert repair in another, said Erin Duggan, a spokeswoman for the state. The billions of dollars put into the education budget also created or saved jobs, but that's difficult to measure.

Massachusetts last week issued notice to proceed on five transportation projects, said Cyndi Roy, spokeswoman for Gov. Deval Patrick. There are no employment numbers yet. Within state government there's been one stimulus-related hire so far -- the stimulus czar.

For the record, the U.S. Bureau of Labor Statistics says employment at the end of March stood at 133,019,000 jobs. That compares with 133,682,000 jobs at the end of February, the month Obama signed the stimulus bill.

The administration acknowledges its estimate does not reflect a net gain in jobs.

"It doesn't mean that employment has risen by 150,000," Thomas E. Gavin of the White House budget office said in an e-mail. "Rather, it means that employment is 150,000 jobs better than it otherwise would have been."

Andrea Bernstein of WNYC radio in New York contributed to this report.