Hey. I’m Duaa, a reporter with ProPublica Illinois. I was part of the team that reported and wrote the story “The First 100: COVID-19 Took Black Lives First. It Didn’t Have To,” which we published last Saturday. If you’ve read it, thank you. If you haven’t, I hope you’ll pull it up on your phone or tablet or however you consume your news, grab a cup of coffee and settle in. Actually, maybe two cups. Now that everyone’s caught up, I’d like to tell you how and why we reported it.

ProPublica decided early on in the pandemic that investigating the racial disparities around the coronavirus was central to our mission as an organization. Reporters and editors didn’t know how the coronavirus would affect communities of color, but based on what we did know about underlying medical conditions and how structural racism has played out in our health care system — including disproportionately high rates of maternal mortality for black women — we expected communities of color might be hit hardest.

To get detailed information on COVID-19 deaths in Chicago, we filed an open records request with the Cook County Medical Examiner’s Office. The data we received offered the first evidence that our suspicions were right. Black residents make up just 30% of Chicago’s population but were 70% of the initial death toll. But in that ProPublica way, we wanted to dig deeper.

We decided to focus on the first 100 recorded deaths of Chicago residents, a universe of cases that would allow us to report with authority in a relatively short amount of time; our goal was to get as many of their stories as possible in hopes of understanding why this disease was ravaging their neighborhoods on the South and West Sides. We called in reinforcements — ProPublica reporters based in New York, Washington, D.C., and California — to reach out to all 100 families. Two of the reporters on our team had already written one of the first national stories documenting African Americans dying of COVID-19 at a disturbing rate.

Some families were in the midst of trying to make funeral arrangements, trying to figure out how to mourn their loved ones while observing social distancing requirements, but they still talked to us. We couldn’t reach the families of other victims, including those who had few, if any, relatives still living.

But the families and friends of 22 victims shared rich stories of their lives. They had been health care workers and volunteers. They drove their grandchildren to school every morning and watched “Judge Judy” in the afternoon. They relished travel and serving others in their neighborhoods and in their beloved city of Chicago. Revall Burke, for instance, grew up in the Washington Park Homes public housing development and went on to organize picnics where he would give away school supplies. He was a city worker and an election judge. Rosa Lynn Franklin had retired from her job as a social worker in Alabama before moving to Chicago to be near her only child. Here, she found a community in her extended family and her church. 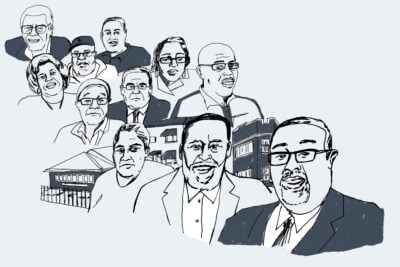 The families, medical experts and others also outlined the far-reaching consequences of decades of disinvestment in predominantly black neighborhoods. Most of the victims were already sick with multiple health conditions, from hypertension to diabetes to heart disease. Many did not trust their neighborhood hospitals. Hospitals are supposed to be havens. But time and again, families told us their loved ones either delayed seeking care or went to their local hospital reluctantly. Doctors said many patients had waited to seek treatment until their symptoms were too severe.

One woman whose father had died vacillated between anger at the system and regret that she didn’t do more to convince him to let her drive him to a hospital. She said she begged him, but he had already been sent home from a hospital that week. He assured her that he was getting better. He died a few days later. “I keep beating myself up,” she said. “What else could I have done? Should I have put his shoes on for him?”

That’s what we tried to demonstrate in this story — that the forces behind these deaths ranged from large systemic problems, such as the lack of well-resourced hospitals in some neighborhoods, to the small moments of a daughter trying to convince her father to go back to the hospital. There are issues in Chicago, and all over the country, that could have, should have and still can be addressed. We discussed those factors Thursday during our virtual event, “A Conversation on COVID-19 and Racial Disparities.” You can watch it here.

We’re grateful to the families for having those difficult conversations with us. If you have a story to share with us or think there’s something we should know, please fill out the questionnaire below or email me at [email protected]. We’re always here to listen.