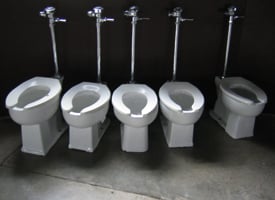 When President Obama spoke of how the stimulus would "rebuild our roads and our bridges and our schools," he forgot to mention another thing the stimulus will be rebuilding -- our bathrooms.

Among the 150 stimulus-related bid requests posted on the federal contracting Web site FedBizOpps.gov is one for "22 precast concrete toilets" at the Mark Twain National Forest in Missouri.

But the federal government isn't the only one spending recovery dollars on the nation's lavatorial infrastructure.

As we noted earlier, Oregon is planning new vinyl walls for its restrooms in Rose Lodge.

Admittedly, while Obama didn't mention bathrooms per se, he has spent a lot of time talking about the need to get rid of waste.