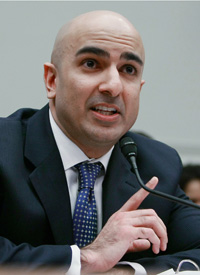 The Treasury Department has invested about $197 billion of the bailout money. About $49 billion more should soon be out the door (see our running tally here). Are banks boosting lending? Are they hording it? Are they using it to gobble up smaller banks?

Who knows. The Treasury Department certainly doesn't have much of an idea about how that money's being spent.

The reason, as both the Government Accountability Office and a new report (PDF) today from the congressional oversight panel point out, is because Treasury isn't tracking it. And it remains unclear whether Treasury thinks it ought to.

Today, Neel Kashkari, the Treasury official supervising the TARP, testified before Congress. And as before, he rejected the idea of tracking the money. "Each financial institution's circumstances are different, making comparisons challenging at best, and it is difficult to track where individual dollars flow through an organization," he explained in his opening statement.

Both watchdogs and members of Congress weren't sympathetic to those challenges.

"If the funds committed under TARP have an intended purpose and are not merely no-strings-attached subsidies to financial institutions, then it seems essential for Treasury to monitor whether the funds are used for those intended purposes," said the report by the oversight panel. The report also pointed out that the United Kingdom required its banks to use bailout money for lending -- and seemed to have no trouble making sure they did so.

"It's not micromanaging to ask people what they did with what you gave them to the extent that it's possible," GAO chief Gene Dodaro said at the hearing.

A number of lawmakers berated Kashkari for not tracking the money. House Financial Services Committee Chairman Barney Frank (D-MA) said that the Treasury wouldn't be getting any more money from Congress without a requirement that the money be tracked.

Rep. Maxine Waters (D-CA), upset that Treasury had yet to roll out a plan to prevent foreclosures, was harsher: "Please don't come here and ask for another penny, because if you do, I'm going to work 24 hours a day with the same people that I worked with to support you to make sure that they do not support giving you another dime."