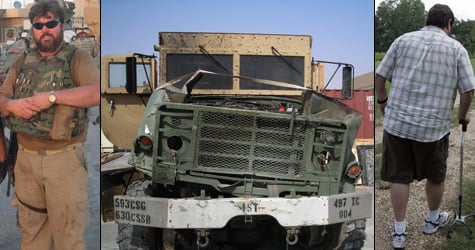 DIBOLL, Texas -- When the war broke out in Afghanistan in 2001, Russell Skoug was having a hard time seeing a better future in this dying lumber mill town in the eastern Texas plains.

A refrigerator repair mechanic, Skoug signed up for a series of jobs in Afghanistan and Iraq before winding up in November 2005 at Wolfpack Security and Logistics, a small company based in Kansas.

For the first time in his life, he was making real money: about $120,000 a year. "It was hot and sweaty and nasty, but I really enjoyed it," said Skoug, a man with bright green eyes, a beard and a tree stump build. "You're helping American soldiers."

Late on Sept. 11, 2006, Skoug was hitching a ride with an Army special forces unit headed back to his base in northwestern Iraq. Skoug was riding in a five-ton truck in the lead of the convoy. Suddenly, there was a flash and a boom. An anti-tank mine in the road had just ripped into the vehicle.

Hot metal tore through Skoug's left side. His bulletproof vest was blown off. His leg was nearly torn from his body. He could barely move his left arm.

"You could see the bone," Skoug said. "It looked like hamburger meat hanging off."

Skoug was treated by military medics, than transferred for further care to a U.S. base in Germany.

Once released, Skoug's wife had to figure out how to hire an air ambulance to transport him to Houston. A dormitory supervisor at a school for the disabled, Linda frantically emptied the couple's bank account and maxed out a credit card to pay for the $17,000 ride.

Once in Texas, Skoug underwent surgery to repair damage. Doctors picked out bone fragments the size of popsicle sticks. The blast had knocked four inches of bone from his femur.

"I had no idea what shape he was in," said Linda. "When I saw him in Houston, it was horrifying. I was in a state of shock."

Wolfpack, it turned out, had never purchased Defense Base Act insurance, the war zone workers' compensation policy required by the government to cover injuries to civilian contractors.

Wolfpack's health insurance provider, Cigna, began denying medical payments since the incident occurred in a war zone, according to a Cigna memo contained in court files.

After two months in hospitals, Skoug had racked up medical bills close to $650,000 with no way to pay for them. Creditors began calling. The couple's credit rating plunged. The Department of Defense sent a bill for $72,000 for Skoug's care in Iraq.

Injured, indebted and crippled, Skoug left the hospital. He pinned his hopes on the Labor Department, hoping the agency could force Wolfpack to pay its bills.

Skoug soon discovered that the Labor Department's internal system to settle disputes is slow. It took almost eight months for Skoug to get a hearing from the time of his injury.

He also found out that the agency's claims examiners have no power. At a hearing, a Labor claims examiner ruled that Skoug was entitled to full benefits. Wolfpack simply ignored the decision.

Shelby Hallmark, the top Labor official over the program, said that his hearing officers try their best to develop consensus among the opposing parties.

Skoug pressed on. By summer 2007, he was having difficulty walking. A bone spur mushroomed in his femur, forming a hard lump under his skin like a golf ball.

He became confined to his house. A relative auctioned a gift basket of beauty products to raise money.

"I just sit and watch TV most of the time," he said one hot June afternoon as he sat at his kitchen table, his leg sticking awkwardly out to the side.

A former Army sergeant, Atwood said that his contract with the military did not explicitly require him to purchase Defense Base Act insurance.

He blamed the military for placing Skoug in the front of a convoy. He faulted Skoug for following the military's directions. He complained about having to pay $300,000 in attorneys' fees to fight the case.

"I tried every avenue I could to protect those guys," Atwood said. "They want to say that Mark Atwood and Wolfpack screwed up. That's bullshit."

Atwood didn't make any disability payments until a formal hearing before a Labor Department administrative judge in August 2007.

Then, just minutes before the hearing began, Wolfpack agreed to pay all Skoug's medical bills, back pay for lost wages and continuing disability payments of $1,034 a week.

"You should be getting a check today," Mike Sprain, Wolfpack's attorney, told Skoug in a conference room outside the courtroom.

Nearly a year later, Atwood was continuing to pay down Skoug's medical bills. Skoug, meanwhile, was waiting for further surgery and rehabilitation to repair the bone spur in his leg, now the size of a softball.

Skoug said he knew the risks in going to Iraq. But he also said that he accepted Wolfpack's promises to take care of him in the war zone. "I should have done already got the operation by now," Skoug said recently.

The Leader of New York’s “City of the Dead” Cashes In. Again.