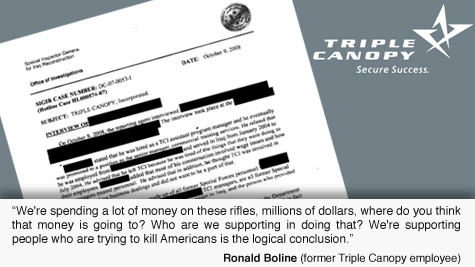 The new $1 billion contract cemented Triple Canopy's status as the pre-eminent provider of private security services in Iraq, with its heavily armed employees appearing side by side with senior State Department diplomats.

But the company's rise to prominence followed a long, often chaotic route, marked by questionable weapons deals, government bungling and a criminal investigation that was ultimately closed without charges being filed, according to newly released investigative files.

Company employees told federal investigators that Triple Canopy swapped booze for weapons and supplies from the U.S. military. They said the company bought guns and other arms on the black market in Iraq. Some worried that the money was flowing into the hands of insurgents, records show.

The previously undisclosed documents and interviews with current and former Triple Canopy officials raise new questions about the U.S. government's ability to oversee private security contractors in a fluid and uncertain legal environment. And they give a glimpse into the messy business of creating a private army on the fly in the middle of a war zone. 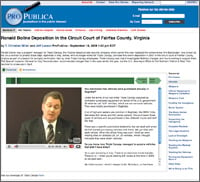 "We're spending a lot of money on these rifles, millions of dollars -- where do you think that money is going to?” Ronald Boline, a former Triple Canopy manager, said in a lawsuit deposition videotaped in June 2007. “Who are we supporting in doing that? We're supporting people who are trying to kill Americans is the logical conclusion."

That lawsuit against the company, filed in a Virginia circuit court by other former employees who sued Triple Canopy for wrongful termination, was settled this week, records show, but no terms were disclosed.

The criminal investigation began in 2007 after federal investigators received a tip that Triple Canopy was using stolen cars and captured Iraqi weapons to boost profits to over 40 percent on some contracts. Andrew T. Baxter, the interim U.S. attorney for the Northern District of New York, declined to comment on why his office decided not to file charges. (His office handled the case because Triple Canopy’s invoices were paid out of a nearby federal contract processing center.)

Stuart Bowen, the special inspector general for Iraq reconstruction, who oversaw the investigation, refused to talk about details. But he said the difficulty in building the case was indicative of the haphazard atmosphere in which billions of dollars of U.S. money was spent in Iraq without oversight.

"It's unclear if anything that Triple Canopy did was criminal, but it was symptomatic of the chaos that prevailed at the time," Bowen said. "It's another example of contracting gone wrong."

Triple Canopy officials said the firm had done nothing wrong. They acknowledged buying weapons in Iraq when they were unable to import U.S. guns. But Lee Van Arsdale, a retired Delta Force colonel who was the company’s CEO until recently, said in an interview before retiring that the firm had taken every precaution to ensure that no money wound up in insurgents’ hands.

"Not only are we former military, but our former colleagues are still serving in uniform, living, eating and breathing right beside us in some cases. In some cases, we've got family members out there," Van Arsdale said. "To say that we're going to fund the insurgency either directly or indirectly, that's insulting."

Triple Canopy began in September 2003, when two former Special Forces soldiers formed the company to take advantage of the burgeoning market for private security. Iraq was exploding in violence, and the U.S. lacked enough soldiers to protect U.S. and Iraqi officials, infrastructure and diplomatic outposts.

The company immediately applied for licenses after winning the contract, according to documents provided by Triple Canopy. Yet the government took months to approve the deal, not authorizing the company to collect the weapons until June 2004. In essence, the U.S. had awarded the company a lucrative contract, but then provided it little ability to arm for the job.

To get the firepower it needed in the meantime, the company turned to the unregulated and unlicensed Iraqi market, purchasing AK-47s and other weapons from local dealers, according to company officials and court records.

The transactions concerned some company officials, according to previously undisclosed records. One midlevel manager told federal investigators that Triple Canopy had purchased weapons "off the street." He "wondered if the proceeds of those sales was funding the insurgency," an investigator wrote.

Former managers also told investigators that the company obtained U.S. military equipment from troops at little or no cost. One man told investigators in an October 2008 interview that the company sometimes obtained Army supplies “for liquor,” and that Triple Canopy employees routinely made “deals with Army units that were rotating in and out of Iraq, to obtain medical supplies, water, MRE’s and vehicle tires, to name a few.”

Boline, the former manager, said the company bought Cuban cigars and liquor to trade for U.S. military equipment. He spoke to investigators in 2007, according to records and officials, and his testimony became public later that year, when he provided a sworn statement as part of the employees’ lawsuit.

"The whole mind-set at the time was, whatever it takes to get the job done we're going to do it," said Boline, who had been fired from the company after disagreements with supervisors. He provided the deposition several months after his termination.

Van Arsdale acknowledged that importing U.S. weapons was "problematic" as the company began operations in Iraq. But he said the company took steps to make sure that it purchased weapons legally.

"There were a few months in there that, ‘all right, now what do we do?,’" Van Arsdale said. "The answer to that was that we establish … a procedure to procure weapons on the local market to mitigate the possibility of that fungible money getting into the wrong hands."

Van Arsdale said Triple Canopy turned to a trusted local buyer recommended by the U.S. government. Triple Canopy produced documents showing that the man it said purchased the weapons, an Iraqi businessman, had been vetted by Defense Department officials.

The company also produced several letters of recommendation from military officials praising the man, who also acted as a translator for U.S. military units.

Van Arsdale said the company had not swapped goods with soldiers for equipment. He said Triple Canopy fully investigated Boline's charges and found no evidence to support them.

He questioned Boline’s motives, noting that Boline waited until 2007 to make his accusations. In his deposition, Boline acknowledged threatening to go public with his charges if Triple Canopy officials blocked his attempts to receive a security clearance in order to obtain a new job.

Reached by e-mail, Boline declined to comment, citing a nondisclosure agreement that he signed when he took his job with Triple Canopy.

Van Arsdale acknowledged the hectic pace of fulfilling contracts. But he said that even under tight deadlines the company didn’t break the rules.

"We defined the gold standard for training and equipping people at great expense to ourselves as well as great time to ourselves,” he said. “At a period of hurry up, hurry up, hurry up, we took over two weeks to train guys to make sure they were prepared to go in country. To say that we're cutting corners and we're opportunistic and we're war profiteers, all of the facts argue against that.

"In terms of weapons procurement, the rules were clear and we followed them," Van Arsdale said.

But former senior officials with the Coalition Provisional Authority, the U.S. occupation government that controlled Iraq until June 2004, questioned whether there were any established procedures for buying weapons from Iraqis.

They noted that any Iraqis with large quantities of weapons to sell were most likely businessmen or military officials associated with the former regime of Saddam Hussein.

Some former U.S. officials in Iraq said that buying guns locally was by definition illicit. Steve Casteel, the U.S. senior adviser to the Iraqi Ministry of the Interior at the time, said there was a "disconnect" between Washington and what was happening on the ground in Iraq.

Triple Canopy's frustrations with the U.S. government were hardly unique. In numerous interviews, former U.S. and industry officials described a crazed atmosphere in which U.S. contracting officers demanded guns on the ground and asked few questions.

"It was wide open. It was like a swap meet," said the official, who works for a Triple Canopy competitor and did not want to be identified. "I'm not aware of any company that didn't use it."

Companies that wanted to conduct business in normal channels were stymied by short deadlines, constantly changing requirements and bureaucratic clashes between U.S. officials on the ground in Iraq and in offices back in Washington.

"People needed to have weapons,” said one former official with the Coalition Provisional Authority. “So of course you went out and bought them on the black market because you couldn't get them from anywhere else. If you have a demand, you are going to have a supply."

CPA officials were aware that there were few controls over the weapons used by their private security contractors. But ideas to exert greater control were ignored.

"We recognized there was a problem, the CPA official said. “We had inconsistent quality. There was not as much control and accountability of those weapons as we wanted."

Other companies also found means. Blackwater, now known as Xe, said in a statement that it had obtained valid U.S. import and export licenses for its employees’ weapons. The company has been investigated for weapons smuggling, though no charges were filed and it denies the allegations.

An official with DynCorp, the second-largest security contractor in Iraq, said weapons were obtained from a variety of sources. In some contracts, requests for licenses were granted, allowing the import of U.S. weapons. For other contracts, requests were denied and the firm turned to the local weapons market.

"We were forced to turn to the local market even for U.S. government contracts and subcontracts because there weren't mechanisms in place to allow export of weapons in Iraq, yet we had the responsibility to provide services under those government contracts," said one DynCorp official, who declined to be named because of the sensitivity of the topic.

A State Department official acknowledged that the department had been slow to respond to the need to arm the private companies it was hiring to carry guns. Until late 2004, the department's Directorate of Defense Trade Controls blocked most requests for the export of automatic weapons to private firms — the result of a decades-old policy to cut down on international arms trafficking.

"This was something that the State Department hadn't considered as a possibility" until the requests for licenses started coming in, said the official, who spoke on background per department policy. "What they did was go through a relatively long discussion and decision process to figure out how to deal with the problem."

While the system for importing weapons has improved in Iraq, industry and State Department officials acknowledged that problems remain in Afghanistan.

Partly, this reflects the fact that more groups are at work there. Unlike Iraq, there is a substantial presence of nonprofits and international aid organizations in need of security. Companies buying weapons from local sources continue to run the risk of money flowing to insurgents, one official said.

Afghanistan is similar in one way, however. Just as in the early days in Iraq, there are comparatively few investigators on the ground to watch the billions of dollars now flowing into the country.

"It's an even worse Catch-22 over there," one industry official said.