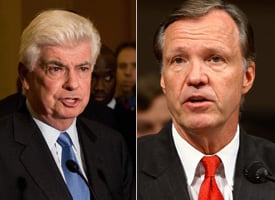 Investors who lost their savings in the financial meltdown will have a hard time recovering their money by suing companies for fraud. That is in part because of a 1995 law that firmly places the burden of proof on the shareholders now taking on Lehman Brothers, AIG and others.

A linchpin of Newt Gingrichâs Contract with America, the Private Securities Litigation Reform Act passed amid a pitched battle between a corporate sector fed up with rampant and costly litigation and a similarly well-funded lobby for class-action lawyers. The actâs huge popularity with Congress made it one of only two laws to pass over the veto of President Clinton. Two of its engineers remain familiar names today: SEC Chairman Chris Cox and Sen. Chris Dodd (D-CT).

The law requires plaintiffs to prove that companies recklessly or intentionally misled their shareholders and caused their losses. (Another key provision creates a âsafe harborâ for executives writing statements about their companiesâ future prospects.) At the time the law passed, Congress also rejected an amendment that would have made an exception for cases involving complex derivatives. In the wake of the current crisis, this means that investors who believe, for instance, that AIG defrauded them by misrepresenting the risks of their involvement in credit-default swaps would be subject to the provisions of Coxâs law.

Prolific plaintiffsâ attorney Bill Lerach liked to call this provision the âlicense to lie.â Once the lawâs most vocal opponent, Lerach is now unavailable for comment; the last trial he attended was his own. Earlier this year in a proceeding that his adversaries greeted with no small amount of schadenfreude, he was sentenced to two years in jail for crimes related to the lawsuits that made him famous. His law firm was accused of collecting $250 million by paying people to serve as plaintiffs in class-action lawsuits filed against deep-pocketed companies. In a further blow to opponents of the law, the Supreme Court in 2005 endorsed its rule that investors must prove that harm resulted from companiesâ misrepresentations.

Still, lawyers with reputations more intact than Lerachâs debate whether the law sets too high a bar. Former SEC chairman Arthur Levitt once questioned an early version of the law, predicting that it would discourage legitimate lawsuits along with the frivolous ones it intended to stop. In fact, that is exactly what happened, contends University of Michigan law professor Adam Pritchard, who co-authored a study last year on the lawâs effect.

Because the law does not allow plaintiffsâ attorneys to subpoena executives or officers, or secure e-mails or internal documents to prove their caseâs merits in the initial stages, it gives courts the discretion to dismiss lawsuits without much information, he said. As a result, lawsuits often work best when preceded by an SEC investigation.

âYou put a lot of power in the courts at the beginning of the operation, and they do the best they can to sort the good from the bad,â said Pritchard. âBecause they have limited information, they will make mistakes.â

Defense lawyers argue that this provision is essential. Plaintiffsâ attorneys would otherwise pressure defendants to settle by engaging in lengthy and expensive fishing expeditions for any sort of material that might be used against companiesâ officers, they argue.

Cox came under scrutiny for his prominence in pushing the act. A Salon article in 2005 rehashed the controversy, pointing out that during the time that he was pushing the bill, Cox was being sued for securities fraud. His preferred version of the bill would have been even stronger, requiring plaintiffs to pay for suits they lost.

Some legal scholars say that the law has successfully weeded out frivolous lawsuits and point out that strong cases still win large settlements.

âIf you look at securities class-action lawsuits since the passage of the act, we have seen some of the weaker cases weeded out,â said Michael Perino, a law professor at St Johnâs University who specializes in securities litigation.

In particular, Perino points to the once-frequent lawsuits against executives and company officers whose quarterly profits failed to miss their targets because of market conditions they could not possibly have predicted. At the same time, he said, the last few years have brought some of the biggest settlements ever in class-action lawsuits, including multibillion dollar payouts in class-action lawsuits filed against Enron and WorldCom.

Sherman Joyce, president of the American Tort Reform Association, believes that the law did improve things. Lerachâs jailing, he said, proved that plaintiffsâ attorneys had only their own profit in mind.

âThereâs no market anymore for lawyers to bring certain cases,â he said. âThere should be a very high burden in recovering in a securities case, and I think the structure that was established creates an appropriate balance.â

Whatever the obstacles, experts expect a lot more securities fraud lawsuits in the coming months as investors try to recover their losses and lawyers try to cash in.

âClearly the incidence of securities litigation has some correlation with patterns in the stock market,â said Perino. âAs market prices go down, there tend to be more lawsuits that are filed.â

By early this year, several law firms had already established or expanded subprime branches to chase the implosion of that market. One firm has already filed suits against Lehman Brothers, AIG, Countrywide Financial, Fremont Mortgage and others.

Blair Nicholas, a partner in the firm filing the suits, Bernstein Litowitz Berger & Grossman, said he wasnât worried about the lawâs lingering effect.