As March Madness kicks into high gear, we will at times see the best of college athletics: good sportsman[or woman!]ship, team work, laser-like focus. But there is also a seedier underside where schools recruit players who are not academically prepared, let them play while turning a blind eye to their scholastic progress, and may eventually turn them loose with no diploma or prospects to show for their hard work.

Academic reform efforts by the NCAA have identified men's basketball as being most prone to such abuses and poor academic performance, with shockingly low graduation rates for many teams and enormous racial disparities even among members of the same team, as Education Secretary Arnie Duncan, a former basketball player himself, pointed out in a Washington Post op-ed this morning.

"Colleges and universities need to stop trotting out tired excuses for basketball teams with poor academic records and indefensible disparities in the graduation rates of white and black players," Duncan wrote.

We've decided to create the first annual ProPublica NCAA Tournament Bracket, where the teams with best academic performance win. We created it via the New York Times' handy bracket feature. Relying on academic scores results in a somewhat unlikely projected champion: Butler University. (We're not the only ones who have had this idea: Inside Higher Ed has done their own academic performance-driven bracket. Update 3/17: And we should emphasize, they've been doing it for years.) 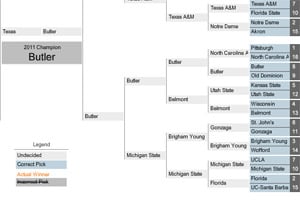 To do that, we used the NCAA's own numbers. For every sport at every school, the NCAA calculates an Academic Progress Rate score, or APR. A perfect APR of 1000 indicates that all of a team's athletes remain in the program and are in academic good standing. An APR below 925 will result in sanctions for your program, including loss of scholarship slots or a ban from postseason play. It's not a terribly high bar -- it corresponds to roughly a 50 percent eventual graduation rate according to NCAA estimates. (Here is more about the math.)

We've done this because we want to easily compare how well success in school corresponds with success on the court. As the tournament goes forward, the New York Times tool will evaluate the success of our picks, leading to all kinds of interesting potential analysis and we will keep you updated.

In 2008, an NCAA working group suggested changes for basketball programs intended to address the long-standing issues with the poor academic progress of student athletes. A similar earlier effort for baseball players had paid off. But member schools rejected the basketball reforms, in part because they were concerned about the effects on revenue.

And little wonder, with the big bucks at stake: a new Knight Commission report points out that the $400 million the NCAA has paid out to basketball teams for tournament appearances over the past five years has been distributed with little regard for the academic performance of the team. The message to schools: it pays to do what it takes to get into the tournament, even if that windfall is not passed along to the players.

In all, about a dozen teams in the tournament's 68-team field have been sanctioned because of poor academic performance in the past five years.

At the bottom of their brackets, academically, are teams that have serious problems. Two teams in the tournament, the University of Alabama at Birmingham (APR 825) and Syracuse University (APR 912), are actually currently being penalized scholarships. Birmingham's performance was so poor that it could have resulted in a ban from the tournament, but they were allowed to compete after submitting an action plan. The University of Texas at San Antonio had an abysmal multiyear APR of 885 but was also spared penalties because of "demonstrated academic improvement and favorable comparison based on other academic or institutional factors." The NCAA report is mum on why the University of California, Santa Barbara was not penalized with an APR of 902.

Teams with slightly better scores also obscure nearly total failure to ensure the success of African-American athletes. As Duncan pointed out, Kansas State gets a nearly passing APR of 924 overall, but that is because 100 percent of its white athletes have graduated in recent years, while only 14 percent of the squad's African-American athletes did.

There's another curious phenomenon, though. The schools that have the highest academic ranking overall often have less than stellar records with the performance of student athletes. There are seven teams in the tournament representing universities in the top 25 of the U.S. News & World Report rankings. None -- even Princeton -- has a perfect 1000 score, and the top schools' average is just 967. The University of Southern California, ostensibly the 23rd-best university in the United States, has a cringe-worthy APR of just 924.

A more direct comparison: The University of Michigan is ranked 29th by U.S. News, but it has an APR of just 956. Michigan State University is ranked 79th but has a perfect APR of 1000.

This raises the question: Are the best schools best for all their students, or are student athletes being left behind?