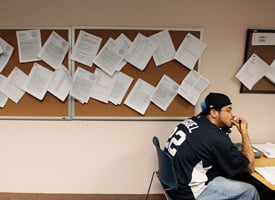 The debate over the stimulus has been about jobs, jobs and jobs. Unnerved by the 9.5 percent national unemployment rate, which is predicted to hit 10 percent by the end of the year, politicians and economists have begun asking whether we need a second stimulus. Well, a blog post today on the New York Times Web site throws another wrench into the debate. It's not about jobs, it's about who can best provide them. In "An Ill-Timed and Ill-Targeted Stimulus," an economics professor at the University of Chicago argues that the federal government invested far too much stimulus money into the public construction sector. Working from a chart that shows the dramatic plunge of private residential construction activity, the economist, Casey B. Mulligan, argues that private non-residential construction rose significantly because it absorbed additional workers and resources abandoned by the private housing bust. The public sector did not. From here Mulligan moves swiftly to his  argument: "Public spending cannot both put unemployed housing resources back to work and provide value to the public: The housing resources are ill-suited for public sector work." The full piece is here.

States are not spending their stimulus dollars as instructed, a new report by the Government Accountability Office says. Among its many complaints: States are using the money for short-term projects, filling budget gaps rather than paying for long-term improvements; they are sending fewer dollars than needed to the most economically distressed areas; and they are using education funds to prevent layoffs instead of for innovative new programs. USA Today has the details.

On Tuesday, we pointed you to an op-ed by the Wall Street Journal's Gerald F. Seib arguing that the administration can't entertain the idea of a second stimulus since it has consistently argued that the stimulus just needs more time. As Seib put it, the administration is "boxed in, politically and rhetorically." Seib has more to say on this -- here's a video of him explaining what he sees as the administration's options.

If there's one thing a debate does, it creates sides. Bloomberg.com reports, "Democrats split on stimulus as job losses mount." The House majority leader, Steny Hoyer, is now arguing that "we need to be open to whether or not we need further action," while the Senate majority leader, Harry Reid, thinks we should stay the course.

President Obama is in Italy for the G-8 summit. The president and his aides told the other industrialized nations around the table that it's too early to walk away from stimulus efforts, reports the Associated Press. Unlike Vice President Joe Biden, who has said that the administration "misjudged the economy" when it created the stimulus package, the president told ABC News on Tuesday, "There's nothing we would have done differently." Meanwhile, Biden remains stateside -- he visits Saratoga, N.Y., today to champion the Recovery Act.