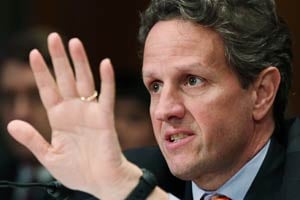 For nearly a year now, we at ProPublica have been reporting on the problems homeowners have encountered when seeking a mortgage modification under the administration’s program.

On Thursday, Treasury Secretary Tim Geithner for the first time acknowledged the depths of the problems, but didn’t offer any new solutions. He committed to release more detailed data on how banks and other servicers are faring—a promise Treasury first made six months ago.

"We are concerned by the wide variation in performance we see across servicers and by the countless frustrated phone calls we receive from borrowers," Geithner testified before Congress on Thursday. He added that the Treasury was "troubled" by "reports that servicers have foreclosed on potentially eligible homeowners" and frequent complaints from homeowners that servicers lose their documents. He said servicers are "not doing enough to help homeowners" and that it was not "acceptable."

This isn’t the first time Treasury Department officials have directed some tough talk at servicers, including vague threats of penalties. But it remains to be seen whether, as Geithner says, the Treasury will follow through and punish servicers that break the program’s rules. Under the program, which involves paying incentives to servicers, investors and homeowners to encourage modifications, the Treasury has the power to punish servicers by withholding those payments. But it has never issued any such penalties. Nor has the government outlined how much such penalties might be.

Geithner did promise to publish, within a month or two, more detailed information about each servicer’s performance, data that could give a much clearer picture of how servicers are treating homeowners. Treasury officials have actually been promising to release this sort of data since last year. In December, Herb Allison, the official in charge of the TARP, said it would be released in January. Like everything else with the government’s loan mod program, it’s taken several months longer than it was supposed to.

The new, more detailed data will show how long it takes each servicer to answer calls from homeowners, how long they take to process applications, and the number of customer complaints each receives. A Treasury spokeswoman also said the reports will provide some sort of breakdown of how many people have been denied mods for which reasons, but it's not clear yet if that data will be made available by servicer.

Until now, the Treasury has been releasing only basic information for each of the largest servicers. And each month, we’ve transformed that data into an easy-to-digest breakdown.

One major problem, the data show, has been the large volume of homeowners in limbo (376,000 as of March). A trial period under the program is supposed to last three months, but for those homeowners, it has stretched longer, sometimes as long as 10  months. In total, 1.2 million homeowners have started trials since the program started a year ago, but only 231,000 have made it to a permanent modification.