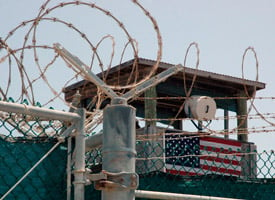 Prosecutors at the war crimes tribunals in Guantanamo Bay can’t be feeling very upbeat nowadays. Over the last six months, nearly every decision on the island has gone against the prosecution.

Yesterday was no exception.

A military judge ruled that a detainee’s alleged confession couldn’t be used in court since it was coerced by Afghan authorities who had threatened to kill the detainee and his family. The threats, the judge ruled, qualified as torture.

The case involves Mohamed Jawad, who was detained as a teenager in Afghanistan after allegedly throwing a grenade at U.S. soldiers in late 2002. Jawad was first arrested by Afghan security officers, who turned up the pressure.

(The judge wrote that he admitted Jawad’s statements "into evidence as a remedy for the Government’s inability to provide timely discovery to the Defense.")

Jawad's lawyer, Major David Frakt, told us that the (forced and now inadmissible) confession was central to the government’s case.

"The only other evidence is some very sketchy and inconsistent statements by Afghan cops who allegedly were eyewitnesses to the crime," Frakt told ProPublica. "However, two of these witnesses have disappeared and the others have serious credibility issues."

We’ve called the Pentagon for their perspective on the ruling. We’ll post their response as soon as we get it.

The ruling is the latest setback of many for the government at Gitmo—and for Jawad’s case specifically.

Last month, the prosecutor in Jawad’s case resigned in protest, complaining in an affidavit that the government hadn't given the defense all "potentially exculpatory evidence." (As we’ve reported, six Gitmo prosecutors have now resigned or asked to be reassigned citing the tribunals’ unfairness.)

Then, a few days after Jawad’s prosecutor resigned, the judge concluded (PDF) that Jawad had been abused at Gitmo. Among other interrogation techniques, Jawad had been subjected to what was known as the "frequent flyer" program. In one two-week period, Jawad—who was a teenager at the time—was moved from cell to cell 112 times. (The judge stated that those "responsible should face appropriate disciplinary action." We have asked the Pentagon whether there has been investigation, but we have yet to hear back.)

The next hearing in Jawad’s case is set for early December. Assuming, of course, the case makes it that far. "If I were the government," said Stacy Sullivan, who has observed the tribunals for Human Rights Watch, "I would be looking to negotiate a plea because its case is falling apart."

Update: We just heard again from Maj. Frakt, Jawad's lawyer, who told us: "In at least 36 separate interrogations at Guantanamo, Mr. Jawad has denied throwing the hand grenade."