Todayâs Justice Department report is clear and damning: A number of former department officials, including then-Attorney General Alberto Gonzales' chief of staff, "committed misconduct" and broke the law in using a political filter to fill non-political positions. Kyle Sampson, Gonzales' former right-hand man, and Monica Goodling, formerly the White House liaison at the department, get the brunt of the criticism, and though investigators are clear that the scope of the behavior was wide, they say the most serious impact was on the country's immigration courts. 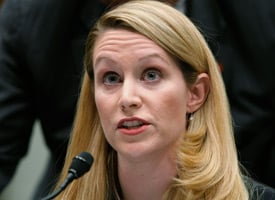 The report is the second of an ongoing series by the Justice Department's inspector general and Office of Professional Responsibility in response to the U.S. Attorney firings scandal. Investigators interviewed more than 85 individuals and reviewed thousands of documents as part of the investigation.

The report is rich in the code used in e-mails by Goodling and others to connote those deserving of advancement: "on the team" was a favorite (e.g. "loyal to the team," "a true member of the team," "completely on the team"), but there's also simply "like you and me" or the more robust "rock-solid Americans."

Those on the wrong team usually got a simpler tag. "Sheâs a D," says one e-mail. Or in another: "she's a big D."

Beginning in 2004, according to the report, Sampson began treating the appointment of immigration judges, which are legally non-political employees, as political appointments. During that time, Sampson, Goodling and Goodlingâs predecessor provided more than 40 recommendations for appointments as federal immigration judges. Prior to Sampson's revolution of the process, the Department's Executive Office for Immigration Review (EOIR) had primarily handled the hiring of judges.

Sampson told investigators that the new policy had been instituted on the advice of Department lawyers, but the report concludes that Sampson received no such advice. Goodling did not cooperate with the investigation, and her lawyer had no comment on the report.

Whereas before openings had been advertised in public announcements, all appointments from September 2004 through December 2006 came as a result of recommendations by the White House, Republican members of Congress or similarly trusted sources.

EOIR Deputy Director Kevin Ohlson warned Goodling repeatedly that the political vetting process had created a bottleneck, "a measurable impact," worsening the backlog of immigration cases in the courts. In one e-mail, he wrote, "I am concerned that at some point people on the Hill or in the media will start to ask why we have not been filling these [immigration judge] vacancies as part of the Administration's effort to ensure that illegal aliens who pose a danger to us are deported in an expeditious manner."

The report makes clear that the tightly controlled selection process resulted in judge vacancies remaining unfilled for long periods of time. Once the White House or others had offered up a possibility, EOIR was almost always quick to approve the selection. Twice judges were hired without even being interviewed. The first candidate Sampson suggested for a position as an immigration judge had been a friend of Karl Roveâs since childhood. The candidate was chosen over hundreds of other applicants.

There was, however, one example of a nominee being rejected by EOIR officials. In that case, they objected because of the candidateâs conduct during the interview: heâd "used profanity during the interview, acted abrasively, and when asked what his greatest weakness was, responded 'Blondes.'"

As a result of reforms instituted last year in the wake of the U.S. Attorney firings scandal, immigration judge appointments are once again handled by EOIR.