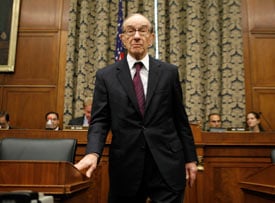 Former Fed Chairman Alan Greenspan has been identified as a prime culprit in creating the conditions for the financial crisis, in particular for opposing greater regulation and fostering a housing bubble. Today, Greenspan is getting his turn on Capitol Hill. And this time, he's speaking in terms we can all understand: admitting some responsibility, while trying to deflect ultimate blame.

In his opening statement, he declared that he was in a "state of shocked disbelief" over the financial crisis, a "once-in-a-century credit tsunami." Rep. Henry Waxman (D-CA), chairman of the House oversight committee, pushed him further in his questioning, asking Greenspan whether he'd made a mistake and whether his ideology had failed him. Greenspan admitted he'd "made a mistake" in believing that financial firms could manage their risk and were "best capable of protecting their own shareholders." In particular, he said, he'd been wrong about the danger posed by credit-default swaps.

There was a "flaw in the model of how I perceived the world works."

Hereâs video of the exchange:

Greenspan's mea culpa had its limits, however. He pushed back against the idea that his policies had helped foster a bubble. And when pressed about his public comments extolling the attractiveness of adjustable-rate mortgages, he said that he'd never said that such loans weren't risky or preferable to fixed-rate loans.

Later, Greenspan said that it only became clear to him that the U.S. was in a housing bubble in "early 2006" and did not forecast a significant decline in home prices because "we'd never had one." Economists had been warning about the housing bubble for a number of years at that point, and the bubble by some accounts popped in 2006.

The explosion of subprime loans, especially the fevered dealing in the securitization of those loans, was the root of the problem, Greenspan argued, but said that wasn't obvious to regulators at the Federal Reserve. "We're not smart enough as people, we can't see events that far in advance. And it's very difficult to say in retrospect why didn't we catch something."

The hearing is still ongoing and can be seen on the committee's Web site and on C-Span.