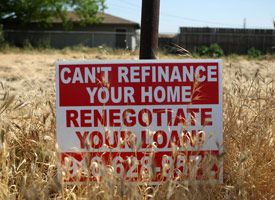 It seems like a gruesome business: A homeowner is floundering, in real danger of foreclosure. The mortgage mod salesman swoops in and offers salvation -- for a fee (typically thousands of dollars) -- by helping renegotiate loans. Whether that salvation ever comes is another matter.

Such offers, as the Washington Post reported over the long weekend, is a growing business and one worrying federal and state regulators because homeowners should be able to get loan modification help from nonprofits, which charge nothing or next to nothing for the service. One HUD official told the Post the department is "extremely concerned about the huge proliferation of for-profit companies making a buck on these people."

It's unclear from the piece just how many of these types of firms exist. The Post focuses on a handful of examples from around the country. The names suggest a range of approaches, some sounding like venerable public-spirited institutions, some like consultancies: LoanMod.com of Michigan, U.S. Homeowners Assistance of California, U.S. Housing Assist of Nevada, and Mortgage Analysis and Consulting of Virginia.

Their justifications for their business also range. The chief of LoanMod.com argues that companies like his exist because nonprofit groups aren't cutting it (they're not "as efficient as the regular market"). The heads of U.S. Housing Assist and Mortgage Analysis, by contrast, say they're not in it for the money. One says he returns the fee if his firm can't help the homeowner, the other says his organization is a nonprofit in everything but name -- helping homeowners (for a fee), he says, is "a mission and a duty."

If these firms are representative, they seem to mostly be run by former mortgage brokers. One argues that his former contacts as a broker have helped him work out loan mods for his customers, but the piece doesn't offer evidence either way as to just how successful these types of firms are in getting the job done. Getting a loan modification at all often proves very difficult due to the complexities of securitization.

The Post reports on a few examples of very unhappy customers, such as a Virginia man who paid $7,000 to Mortgage Analysis, because, he says, "I was blind." Eventually, some of that money was returned and "in the end, with the help of a nonprofit legal group, he was able to get into a new loan -- at no cost -- through a Federal Housing Administration program." Mortgage Analysis responds that most of that money was spent on an auditor and that the firm "did not profit from the interaction."

None of what these firms do is illegal, the Post reports, with the exception of states like Maryland that prohibit charging an upfront fee for such a service. Laws seem to vary from state to state, as do whatever state agencies might regulate such a business -- all adding to a foreclosure situation that is already maddeningly complex.