After his mother was killed by a driver delivering Amazon packages, Tyler Hayes wrote a letter to Amazon CEO Jeff Bezos.

Hayes asked Bezos to come up with safer ways for Amazon’s contractors to deliver packages so that no other family would experience the devastation his has.

“Amazon is a leading company in so many areas, but is repeatedly cited for putting its workers at risk from over working, which has put others at risk as well,” Hayes wrote. “Maybe it was simply carelessness by one driver at one time that forever impacted my life, but I don’t think so. I think this attitude of reckless speed stems from the top and trickles down.”

Hayes couldn’t bring himself to send it.

Stacey Hayes Curry, 61, was a legal secretary at a San Diego law firm. On a clear June day last year, she was coming back from a walk in the office park where she worked when a delivery driver for an Amazon contractor ran her over with his rented cargo van.

He told police he had just dropped off a package at one building in the office park and was on his way to another. He thought he had hit a speed bump and didn’t realize he had run over a pedestrian until he saw Curry on the street in his rearview mirror, police records show.

In reconstructing the crash at the scene that day, San Diego police noted that the music playing in the van was so loud they had to turn it down, and that there were no visual obstructions that would have prevented him from seeing Curry clearly.

“I just don’t know how the hell she got there,” police said the driver told them. The officer who reconstructed the crash added, “This statement alone tells me he was never paying attention to what was in front of him.”

The driver pleaded guilty to a misdemeanor charge of vehicular manslaughter, according to the San Diego City Attorney’s Office.

Curry’s family settled a claim with the contractor’s insurer but did not sue Amazon, Hayes said. Efforts to reach the driver were unsuccessful; the contractor did not return calls seeking comment; and Amazon declined to comment. 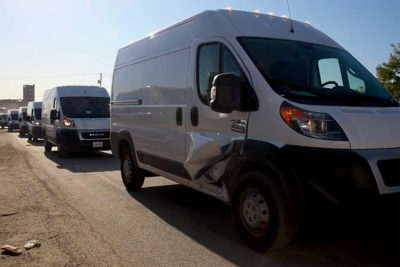 Curry had raised two children as a single mom. She remarried in 2000 and was talking about retiring. She was devoted to her two grandchildren.

“Never once did I feel unloved or unappreciated,” Hayes said in a eulogy for his mother. “She loved me more than I ever would have asked her to. I couldn’t be more proud of who she was and how she sacrificed everything for me and my sister.”

Curry also helped her 93-year-old mother live independently, doing her grocery shopping and making sure they didn’t miss their beloved San Diego Padres games on TV. Curry called her mother every day and took her out to lunch after church on Sundays, said her brother, Tim Hauck.

“She was a real devoted daughter,” Hauck said, adding that their mother has noticeably declined since Curry’s death.

On June 15, 2018 my mom was hit and run over by a delivery truck contracted by Amazon in San Diego. She died on the way to the hospital.

This has devastated my family as you might imagine. My mom was a wonderful, hardworking woman who is missed by many.

I’m writing to advocate for Amazon putting more time and resources into its workforce safety. Not just those first-party employees, but those contracted out in the last-mile efforts.

By all accounts my mom’s death was an accident and wasn’t malicious. ... But from police reports there also wasn’t any remorse from the driver. Amazon PR offered a generic statement the day of the accident. But the contracted company did not.

This letter is simply to ask — How can you lead Amazon to innovate around safety? Amazon is a leading company in so many areas, but is repeatedly cited for putting its workers at risk from over working, which has put others at risk as well.

Maybe it was simply carelessness by one driver at one time that forever impacted my life, but I don’t think so. I think this attitude of reckless speed stems from the top and trickles down. There are plenty of reports of this over the years, from employees not being able to take bathroom breaks to drivers taking on too many deliveries and driving dangerously.

I truly hope Amazon can right the ship it’s charting on employee safety and how it conveys incentives to companies it contracts. Amazon’s worker safety ultimately impacts us all and the pain from this accident is one I hope no one else has to experience.