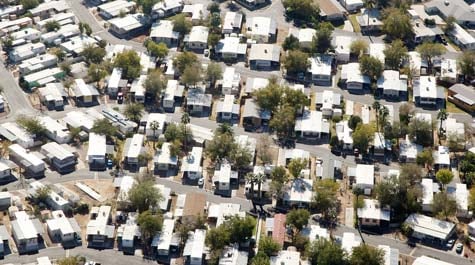 Nathan Reynolds is something of an expert on the government’s foreclosure prevention program. A mortgage broker who’s worked in the Chicago area since 1998, he’s seen both his business and his home’s value plummet in the past few years. After receiving his own trial loan modification from JPMorgan Chase, he’s helped others apply for modifications through the program on his own time.

But in November, after Reynolds had made trial loan payments for seven months, Chase told him his mortgage would not be permanently modified. Chase had determined that his personal financial troubles were only temporary — because Reynolds had expressed optimism that the administration’s policies might rescue the housing market, boosting his income.

That’s not a legitimate reason for a loan servicer to deny someone’s modification, according to the Treasury Department’s guidelines for the program. And Reynolds’ experience — along with the cases of two other homeowners examined by ProPublica, shows how servicers have created unnecessary hurdles that, in some instances, violate the loan program’s rules.

The administration set a goal of helping up to 4 million homeowners through the $75 billion mortgage modification program as a way to blunt the boom in foreclosures. Treasury has produced a growing number of mandatory guidelines for banks and other loan servicers to review applications and perform the modifications. In exchange for tailoring loan payments to 31 percent of the homeowner’s monthly income, both the servicer and the owner of the loan receive incentive payments.

Servicers representing 85 percent of the housing market have signed up to participate. Applicants must first go through a trial period before their mortgage payments can be permanently reduced. But servicers have been slow to convert hundreds of thousands of trials into permanent modifications — as of November, only about 31,000 had been made permanent. That spurred Treasury to publicly criticize the servicers’ performance and to put out new guidelines in recent months to speed up the process.

Treasury said recently (PDF) that the effort has resulted in a "significant increase" in offers of permanent modifications, but numbers demonstrating how significant won’t be available until February.

ProPublica has reported since last June on homeowners’ frustrations in receiving a prompt answer from servicers, particularly the program’s largest servicers — Bank of America, JPMorgan Chase, Wells Fargo and CitiMortgage. In response to widespread complaints, those servicers have dramatically increased staffing and touted other improvements, such as new document management systems.

But when homeowners do get an answer, the reasons don’t always jibe with how the program is supposed to work. Housing advocates say this is a direct result of a lack of effective oversight of servicers in the program, something ProPublica has focused on before.

‘An Excuse to Deny Someone’

Reynolds was a prime candidate for a loan adjustment and was among the earliest homeowners to receive a trial modification.

His mortgage brokerage business had followed the market downward, and as a result, he’d fallen three months behind on his interest-only mortgage. Area real estate cratered. His own home, bought in 2001 for just over $400,000, had rocketed up to about $1.2 million in value in 2006, and then down again to about $350,000. With a refinancing in 2005 and a home equity line of credit with Countrywide, his mortgage debt exceeded his home’s value by more than 70 percent.

Soon after the loan program was announced last February, Reynolds applied. He received an application in late April and was accepted, making his first payment of about $2,400 (down from $3,300) in May. He made six more payments. Like many borrowers in the program, he says he was asked over and over to send the same documents and later, updated versions of those documents. Finally, in late November, he received an answer: He was denied a permanent loan modification.

The reason? A Chase employee explained to Reynolds that they’d determined his financial difficulties weren’t permanent. In his application, he’d written that he believed that the government’s rescue efforts would "save the U.S. housing market" and that his business "will once again be profitable." The Chase employee told him that statement indicated his hardship was only temporary.

"That’s just nonsense," said Thompson of the consumer center. "To me, that sounds like an excuse to deny someone."

Chase spokeswoman Christine Holevas told ProPublica that Reynolds had been denied "because the skill and ability is still there to earn the income." Since he’d "stated in his letter that business would be picking up," it was "not considered a permanent hardship," Holevas said.

Such a determination contradicts Treasury’s guidance to servicers for the program. A FAQ (PDF) issued to servicers says the program does not "distinguish between short-term and long-term hardships for eligibility purposes."

When ProPublica asked about this guideline, Holevas did not directly respond. She did offer another reason for denying Reynolds: Chase’s review of financial information showed his income had not decreased.

Reynolds, who has a wife and two small children, says no Chase employee had made such a claim to him and that the documents he provided show that his mortgage business dropped more than 50 percent in 2009. He submitted a new hardship statement in December, in which he tried to make clear that his troubles are real and lasting. Holevas said those documents would be reviewed.

Now, Reynolds says his finances are at the breaking point and bankruptcy appears unavoidable if Chase denies him again. "I did everything that was asked of me, but Chase has me backed into a corner that I cannot get out of."

Six months into a trial modification, Gary Fitz of California still doesn’t know whether or when his mortgage will be permanently modified, and he’s been told he’ll have to wait for a few more months.

Under the program’s design, the trial period was supposed to last three months, giving time for the servicers to collect and evaluate the homeowner’s financial information. At the end of the trial, if the homeowner fit the program’s criteria and had made all three modified payments, the servicer was supposed to promptly make the modification permanent.

There are a number of adverse consequences of a trial period’s dragging on, said the consumer law center’s Thompson. Because a homeowner is not making a full payment, the balance of the mortgage grows during the trial period. The servicer reports the shortfall to credit reporting agencies, so the homeowner’s credit score can drop. And most important, says Thompson, the homeowner isn’t saving money in case the modification fails and the home is foreclosed. "Keeping someone in a trial modification really does not do them a favor," she said.

Fitz’s case shows why some homeowners have remained in limbo so long.

He sought a loan modification in the spring of 2009 because his wife’s salary had been cut. Like millions of others, he applied soon after the administration announced the program last February. He was accepted for a trial modification and made his first payment in July.

Fitz was prepared for an uphill struggle. A Wells Fargo customer service representative told him early in the application process that he should make seven copies of his financial information — because Wells Fargo would likely lose it more than once. He says he’s sent the same paperwork in five times.

When the trial stage lasts so long, servicers commonly ask homeowners for updated financial information months into the trial period. Fitz, for example, submitted his paperwork for the first time last spring. But when Wells Fargo requested an updated package in December, it showed that he’d received a pay raise last June of about $80 per month.

Wells Fargo spokesman Kevin Waetke said the company does not comment on individual borrower’s cases. He did say, however, that "the federal guidelines require a final review of updated financial documents before moving any Home Affordable Modification from trial status to complete."

That’s not true. A Treasury guidance (PDF) to servicers issued in October, meant to streamline the review process, says there is "no requirement" to "refresh" the homeowner’s documentation as long as it was up-to-date when it was originally received.

Wells Fargo also appears to have begun Fitz’s second trial period contrary to Treasury guidelines. A Treasury guidance (PDF) last April said that a servicer should not begin a new trial period if a homeowner has only a minor income change (defined as exceeding the "initial income information by 25 percent or less"). Guidelines issued later (PDF) are even more restrictive about starting a new trial period. The reason is clear: The purpose of the trial period for the homeowner is to demonstrate the ability to pay, and such a small change in income is unlikely to affect that.

Asked to respond, Waetke said that "given the complexity of the program, the volume of calls we receive and the number of modifications currently in process, there is the potential for a mistake to be made." He added that Wells Fargo would continue to review the case.

Sometimes there seems to be no reason at all for a trial period to drag on.

Cynthia Mason of Texas, another homeowner with a Wells Fargo mortgage, also recently restarted her trial period after several months.

Last spring, she sought a loan modification because medical and other expenses had made it impossible for her to afford her mortgage payment on a fixed alimony income. She’d planned to supplement that income with a job, but has been unable to find anything. Like Fitz, she began the program in July.

In October, good news came with a phone call: She’d been accepted for a permanent modification. She waited for the final paperwork to arrive, but it never did. Instead, while speaking to a Wells Fargo employee about an unrelated issue six weeks later, she found out that she’d in fact been denied. When Mason inquired why, she says she was told some documentation was missing, but the employee could not tell her what it was. She also learned she owed late fees because she’d paid the modified payment, not the original, full payment, in November and December.

When she complained about the late fees (which were eventually canceled), she was passed to a different employee, who told her she was being put back into a trial period. She didn’t understand why. Another representative finally told her that she’d been denied because of a negative "Net Present Value" test. The test is the calculation at the center of the Treasury Department’s program: It determines whether the loan’s owner (sometimes the lender, sometimes a mortgage-backed security’s investors) is likely to make more money modifying the loan or not. A negative result means the servicer has no obligation under the program to modify the loan and is a common reason for denial.

But in Mason’s case, a Wells Fargo employee told her she’d nevertheless been put back into the trial period in order to "buy time."

Wells Fargo spokesman Waetke declined to speak about Mason’s case but did say that the bank sometimes extends the trial period "to allow customers time to get the documents so we can complete the review." Mason says she doesn’t know of any documents that might be missing, and she’s not optimistic about receiving a permanent modification. By extending the trial, Mason told ProPublica, Wells Fargo is "just prolonging the inevitable" – denial.

Have you applied for a loan modification under the Obama administration's Making Home Affordable program? Are you thinking about it? If so, we at ProPublica want to hear your story.