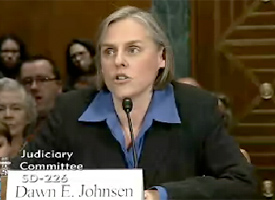 Uncertainty over how or whether the Obama administration will differ from its predecessor on counterterrorism matters continued yesterday with the confirmation hearing of Dawn Johnsen, the president's nominee to head the Justice Department's Office of Legal Counsel. That's the office that essentially tells executive branch agencies what the binding law is.

We've described how Johnsen, a constitutional law professor, had excoriated the Bush administration for keeping secret key legal opinions that purported to justify policies including abusive interrogation, warrantless domestic wiretapping and rendition. One of the handful of memos made public -- two years after it was authored, and only after it was leaked to the press -- is the infamous 2002 "torture memo," which raised the threshold of acceptable pain and said the president is not bound by anti-torture statutes.

Feinstein is especially interested in an October 2001 memo that is believed, based on a passing mention in a different memo, to say the 4th Amendment prohibition against unreasonable searches and seizures doesn't apply to military operations within the United States.

Johnsen replied that, "in the normal case," an opinion could be released as soon as the executive branch agency that requested it signed off. "There may be other opinions, though, where there is classified information in the opinion that would need to be redacted, or that prevent the opinion from being released at all at that point in time," she said. She had previously said that national security concerns would be an important reason to withhold OLC's work, but she has argued in favor of a presumption of disclosure and redactions rather than total secrecy.

The answer was "very vague and imprecise," Feinstein said.

Jameel Jaffer, director of the American Civil Liberties Union's National Security Project, told us, "I would have liked to hear a clearer commitment" to releasing the memos and to the public value of doing so. But, he said, "ultimately what matters is not what Ms. Johnsen says but what she does, and when she does it. We're hopeful that over the next few weeks we'll start to see some of these memos released."

The ACLU has been in litigation against the Justice Department for years, seeking release of the memos. Our list of the memos comes largely from court responses the ACLU got out of Bush administration lawyers.

At the hearing, Sen. Sheldon Whitehouse (D-RI) urged Johnsen to conduct her national security review of the OLC memos closely. An entire category of opinions dealing with warrantless wiretapping remains secret. Whitehouse said he had received clearance to review these opinions and gotten some of his notes from the session declassified. He read a quotation from a still-classified OLC memo he'd taken down: "The Department of Justice is bound by the president's legal determinations."

Whitehouse said this was a legal proposition -- a rather remarkable one -- not classified information. "For the life of me, I couldn't figure out how those things needed to be classified." He speculated that the reason was to protect the memos' authors from embarrassment.