My mother, a pediatrician and internist in the south suburbs of Chicago, tested two of her patients for COVID-19 late last week, a young person with a mild cold who had recently traveled to China and an older person complaining about a toothache whose temperature was just over 100 degrees. My mom also tested herself. Guess which patient tested positive? The one with a toothache.

The unexpected outcomes suggested that COVID-19 could be anywhere, lurking among patients who complain of none of the telltale symptoms: a fever and dry cough. The extent of how the global pandemic is spreading is not necessarily obvious by looking at official numbers as people across the U.S. struggle to get tested.

I found out about the whole sequence of events during what have become daily phone updates about my mom’s work. I ask questions as a daughter concerned for her mother. This week, she answered as Dr. Cynthia Thomas whose daughter happens to be a reporter.

The positive result set off a frenzied day of canceling appointments, wiping down just about everything in the primary care facility with bleach, testing her staff for the virus and asking patients who might have been affected to return for testing. My mother prepared to temporarily shut down her clinic, meaning that her patients would need to go elsewhere for most of their medical needs.

My mother is pretty press averse. So much so that she threatens to slam the door in the face of any reporter looking for comment should tragedy ever befall our family. She asked that her clinic and its exact location be unnamed. But this growing public health crisis concerns her enough that she wanted to share her experience with others to make a point about guidelines that instructed her to test patients who recently traveled but that leave big gaps for patients with vague complaints.

After the positive result came back, she called and reported it to the county and state health departments. The Illinois Department of Public Health said in an online daily update that as of Monday the number of cases without “a clear connection to travel or a known COVID-19 case is increasing.”

But when my mom called that agency, a doctor questioned her about why she tested the patient with the achy tooth who didn’t necessarily present with symptoms of COVID-19.

“He said to me, doc, ‘the guidelines right now say that if you don’t have a cough, fever, shortness of breath — if you don’t have symptoms — don’t test,’” she told me. “And before I knew it, I said, ‘That’s baloney.’”

This situation is evidence of that, she said, adding that they both acknowledged that everyone is overwhelmed and trying to do the best they can.

So why did she test?

“I can’t explain it other than she didn’t look right to me,” she answered. “I really thought this was her tooth.” But based on the patient’s medical history and the mild fever, my mother, an independent provider, tested her just in case.

My mother’s clinic now will be closed until the end of March at least, contributing to a provider shortage in the meantime. She cares almost exclusively for low-income uninsured patients or those with government health insurance.

The nation suffers from a shortage of supplies — N95 masks, tests for the virus, ventilators — needed to contend with the pandemic, and the federal response has a new sense of urgency after a sluggish start. My mom’s clinic happened to have a supply of about 60 test kits after dogged requests to the lab.

The most recent “COVID-19 testing decision matrix” from the Illinois health department says people should be tested if they have a fever and/or signs of a respiratory illness. They also should have had contact with someone who tested positive or traveled to affected countries like China within two weeks of showing symptoms; reside in a “congregate living” or a health care facility; have medical risk factors; or be hospitalized.

It had been longer than 14 days since her younger patient came back from China, but the person had a cold, lives with a grandparent and feared making an elderly person ill. 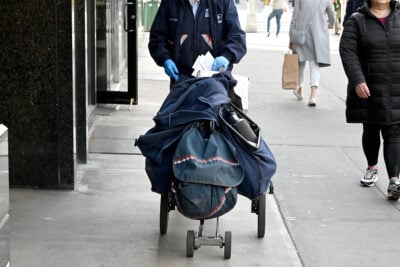 As a precaution, my mom made the patient wait in the car until the office was cleared. Then, using a back door, the person was escorted to an exam room and was tested. There was a frantic trip down the road to get the necessary protective masks from another provider who was able to spare a few.

After administering the test, my mother ordered the person to stay away from everyone, especially the grandparent, and isolate in a bedroom until the results came back. She then fumigated that exam room and decommissioned it for the rest of the day.

She also ordered the patient with the toothache to remain in the house until the results came back. But she didn’t take similar safety precautions to isolate the patient beforehand because the need for the test didn’t present itself until they were in the exam room. Four days later, all of the results came back, negative for my mother and the other patient and positive for the woman with the toothache.

My mom called the Illinois Department of Public Health to report the positive finding and was told to contact the Cook County health department. Someone there told her: “We might already have it, but I don’t know. Just fax it to me.”

About an hour later a state health department doctor called, saying he’d been alerted by the lab and had already spoken with the patient. He wanted to know more about the patient’s symptoms and why she visited a doctor. The patient and her daughter said the same thing: They went to the doctor because her achy tooth was causing headaches, neck pain and an occasional cough, and the only reason she got tested was because my mother recommended it as a precaution.

Now, the entire house — the patient lives with a daughter and grandchildren — is quarantined.

Do you have access to information about coronavirus that should be public? Email [email protected]. Here’s how to send tips and documents to ProPublica securely.