Russia's announcement this morning that it will cease its offensive in Georgia has created a potential lull in what was a rapidly escalating military and diplomatic crisis. 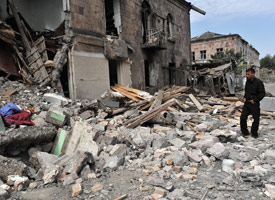 Whether the fighting really ends, one result of the conflict is clear: it has thrown a bright light on that region's importance to global oil supplies. A pipeline that runs through Georgia is the second largest in the world.

But a little-reported fact is that American tax dollars were used to help fund big oil projects in the region.

Georgia sits between the rich oil deposits of the Caspian Sea in the East, and the friendly shores of the Mediterranean in the West. Since 2006, a 1,100 mile pipeline has pumped that crude from Baku, in Azerbaijan, westwards across the conflict-torn continent to tanker ships waiting at the Turkish city of Ceyhan. The multi-billion-dollar Baku-Tbilisi-Ceyhan pipeline is run by an international consortium, including American oil-giants Chevron and Conoco-Phillips.

The Daily Mail in the U.K. has reported that Russian planes have targeted the pipeline, and Georgia's president, Mikheil Saakashvili, told reporters at a conference call that the war is a Russian oil-grab to "control energy routes."

So, how is U.S. taxpayer money bound up in all of this?

It has to do with the role of the two government agencies, the Export-Import Bank (Ex-Im) and the Overseas Private Investment Corporation (OPIC), that lend money to private companies doing business overseas.

These agencies exist to promote U.S. business abroad, which they do by giving loans and guarantees for projects that are too big or, in many cases, too risky for the tastes of private banks and financiers.

"We exist to take risks that the commercial markets either cannot or are not willing to make," said Phil Cogan, spokesman at the Ex-Im Bank. "That's the reason for export credit agencies for the most part. It's to support the exporters of the United States because those exporters wouldn't be able to make the sale unless there was a guarantee or direct lending."

In the case of this pipeline, the Ex-Im Bank gave a $160 million guarantee to a group of banks that wanted to lend money to the companies involved in the project. If the project fails or goes up in flames (which it could do, literally) Ex-Im will bail out the private banks, and taxpayers will be left holding the bag.

Same deal for OPIC, which gave the project $100 million in "political risk insurance." In other words, the companies apparently weighed the risk of just the sort of conflict the region is now facing, and then went to a government agency for insurance.

Critics see these guarantees as a form of corporate welfare.

"If we're talking about the oil and gas industry, there's absolutely no need for the federal government to be investing in any new projects," said Keith Ashdown from Taxpayers for Common Sense, a non-profit that works to reduce wasteful government spending. "These guys are making money hand over fist, and they can be investing in their own new capital projects."

In the case of the BTC pipeline, activists and academics have been warning about the project's dangers for years, and arguing that taxpayers shouldn't incur the risk.

Ex-Im spokesman Cogan stresses that the government-funded bank usually brings in a net profit from the fees it charges for insuring risky projects. He also said that this loan is far from the biggest that Ex-Im has made.

Nor is the U.S the only country whose taxpayers helped make the deal happen. The biggest player in the project is British Petroleum, which owns just over 30 percent of the pipeline. The U.K.'s export credit agency, as well as the European development bank, also put money into the deal.

BP spokesman Robert Wine said despite the reports that the pipeline has been targeted by Russian planes, the "pipeline hasn't been affected by the conflict." He said that BP "continues to monitor the situation."

"The pipeline is a channel that runs through Georgia," he said. "We don't have business interests of any great note in Georgia, and clearly this is a matter for the governments of Georgia and Russia."