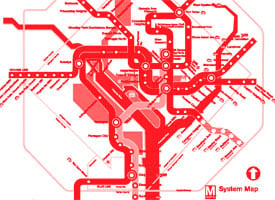 The government has justified its ever-growing bailout of AIG by claiming that the insurance behemoth's failure would put the entire financial system at risk. But, even with the bailout, AIG's slow-motion collapse has threatened to take with it many of the nation's transit agencies.

Banks and financial firms could demand between $2 billion and $3 billion from more than 30 public transit agencies, potentially causing the agencies to make significant cuts to services, transit officials have said.

The problem, largely lost amid a flurry of election coverage, stems from the recent failure of longstanding financing deals between banks and agencies such as the Washington, D.C., Metropolitan Area Transit Authority, or Metro. As part of the deals, banks bought transit equipment from cities and then leased them back to the transit agencies. The banks received tax breaks, and the agencies enjoyed much-needed cash up front.

AIG guaranteed the deals, effectively providing insurance in the event one side defaulted. When AIG collapsed in September, so did the deals. Quickly, banks began demanding huge termination fees from Washington, D.C., and other major cities.

Despite the now-obvious risks, the federal government approved and promoted (PDF) some of the arrangements in its "innovative financing handbook," (PDF) originally circulated in the 1990s.

But the deals, which allowed banks to shelter large amounts of income from federal taxes, have been banned by the government since 2004.The IRS is now giving firms until the end of the year to terminate these tax shelters.

Before that happens, some banks want to collect as much money as possible from the cash-strapped transit agencies.

Top Senate Democrats from states affected by the deals have written to Treasury Secretary Henry Paulson and Federal Reserve Chairman Ben Bernanke, urging them to "develop a solution" to the problem.

"If the Treasury and Federal Reserve do not act quickly, public transit agencies around the nation could become financially crippled and several banks could enjoy unjustified windfalls," said a letter signed by Sens. Robert Menendez and Frank Lautenberg of New Jersey, Sen. Richard Durbin of Illinois and Sen. Barbara Boxer of California.

Until the recent problems, everyone seemed to benefit from the arrangements. Here's how it works: Banks and other for-profit businesses can reduce or defer their federal income taxes on capital investments that decline in value, such as rail cars. So transit agencies, which don't pay federal taxes, sold their rail cars and other equipment to banks. The banks then leased the cars back to the agencies to use at a discount.

In short, banks were able to shelter income from taxes while receiving steady lease payments from the transit agencies. Meanwhile, agencies rented the cars for cheap and received large sums of bank money up front, which often went to equipment upgrades.

"It was easy money for AIG and the banks and a good deal for the transit agencies," said Steve Ellis of Taxpayers for Common Sense. "But it was a really bad deal for taxpayers that’s gotten worse."

The New York Timesrecently reported that these tax shelters flourished in the late 1990s. From 1988 to 2003, dozens of transit authorities entered into nearly 90 of these arrangements worth more than $16 billion.

But the plan hit a glitch when AIG nearly went bankrupt in September.

AIG, now about 80 percent owned by the government, had guaranteed many of these tax shelters, known as LILO (lease-in/lease-out) and SILO (sale-in/lease-out). AIG was there to insure the lease-back deals in case either side couldn’t uphold their end of the agreement. (An AIG spokesman said he didn't immediately know which side in each deal contracted AIG.)

The contracts required AIG to maintain a high credit rating. So when AIG’s rating was cut in September, the contracts went into technical default. Under the terms of the deals, the default allowed banks to collect heavy termination fees or demand that transit agencies find an insurer to replace AIG.

In Washington, D.C., the Metro agency’s lease-back arrangement with Belgium bank KBC Group unraveled when AIG nearly collapsed. Metro recently found a replacement for AIG, but the bank has refused to accept it, a Metro spokeswoman told ProPublica. (No matter the insurer, some banks want to unravel the deals immediately, because the IRS now prohibits them. The IRS has offered a kind of amnesty for firms that terminate their shelters by the end of the year.)

KBC is immediately demanding $43 million from Metro. In total, the Metro system could owe $400 million in payments from 16 tax-shelter arrangements.

"Although I am a daily Metro rider, it's hard to have sympathy for them, since they were working in concert with the banks to short the taxpayer," said Ellis, of Taxpayers for Common Sense.

Metro is now fighting KBC in court. John Reynolds, a KBC spokesman, told ProPublica that "due to the fact that we're in court proceedings, we're not sharing any information with the media."

Metro, meanwhile, has continued to pay AIG, even though KBC no longer recognizes AIG as a legitimate guarantor. AIG spokesman Joe Norton explained that the company has "an obligation to provide security and we still stand in that capacity."

AIG was not the only insurer of these deals, nor was Washington, D.C., the only city to participate. Transit agencies in Los Angeles, San Francisco, Chicago, Atlanta, Philadelphia, San Diego, New Jersey and other cities and states are also involved, according to news reports.

The severity of the problem has caused some legislators to call for the Treasury and Federal Reserve to intervene. Metro officials have met with the Treasury to request that the federal government assume AIG's role in the tax shelters.

"We just want them to back AIG's status, and this goes away," said Candace Smith, a Metro spokeswoman. Otherwise, "taxpayers are at risk for paying more."

Indeed, if the banks continue their demands, the government might end up bailing out the transit agencies -- paying the banks what cities can't afford to. (This might be an unpopular decision if it turns out that some of the banks are already part of the government's $700 billion emergency bailout plan).

If the government does not intervene, agencies are considering cutting transit services and repairs.

ProPublica called a Treasury spokeswoman to learn what the department plans to do, but we haven't heard back.