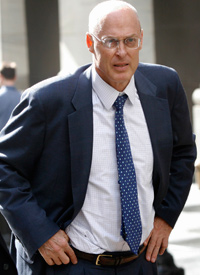 Editor's Note: Thanks to Adam Davidson and the folks at NPR’s Planet Money for working with us on the story.

Over the coming months, the Treasury Department will be doling out $125 billion to financial institutions, in addition to the $125 billion it's already promised nine of the country's biggest banks. And it will be deciding which banks get taxpayer money in private, using a secret set of criteria.

So far, Treasury Secretary Hank Paulson has only provided a general guideline for the so-called Capital Purchase Program. It's "designed to attract broad participation by healthy institutions," he said yesterday.

But what is a "healthy" bank? Those looking for a more concrete guarantee that the Treasury will invest the money wisely will be disappointed.

"The regulators are going to use their supervisory information to assess each bank's eligibility," said Bill Ruberry, spokesman for the Office of Thrift Supervision, but no specific criteria will be released. A spokesman for the currency comptroller's office also said no criteria will be made public. The FDIC and Federal Reserve referred questions to the Treasury Department. Our calls there were not returned.

Lacking clear criteria, the process lacks crucial transparency, said Ross Levine, a professor of economics at Brown University. "It seems an essential part of the U.S. approach to government that we don't trust the angelic behavior of anybody."

"The criteria should be disclosed, at least in broad terms, so that it can be discussed in the open," said Charles Calomiris, a professor at Columbia Business School and a visiting scholar at the American Enterprise Institute.

The lack of transparency also has the banking industry itself concerned. Without clear criteria, said Wayne Abernathy, executive vice president of the American Bankers Association, the banks can't be assured that the government won't choose arbitrarily, and "the opportunity for at least the appearance of unfairness" can arise. "Who would have thought that people would sit still while the government distributes $250 billion?"

The banking association has been asking the Treasury to make its criteria clear, Abernathy said, because banks will be more likely to participate if the program is not seen as a bailout, but rather as an "engine of economic recovery."

Last week, the Treasury announced that nine of the country's largest financial institutions were the first participants in the program, a move made in part to remove the stigma of participating. Those banks will receive a total of $125 billion. The other $125 billion will go to regional and community banks.

According to the application process Paulson outlined yesterday, banks wanting to participate in the program should consult the appropriate federal regulatory authority and submit the two-page application (PDF) available on the Treasury's Department's Web site. The deadline is Nov. 14.

The four agencies that oversee the nation's banks -- the FDIC, the Office of the Comptroller of the Currency, the Office of Thrift Supervision and the Federal Reserve -- will be the first to review the applications. Those agencies have access to non-public information about the banks they oversee. After the regulator makes its recommendation, the Treasury Department will make the final decision.

The Treasury Department has "worked with the regulators to establish streamlined evaluations," Paulson said yesterday. "This means that all regulators will use a standardized process to review all applications to ensure consistency."

A number of economists, Levine among them, have expressed concern that the Treasury Department's new plan might just serve to prop up banks that ought to be shut down. Japan did that in the early 1990s and it contributed to the country's "lost decade." That is especially a risk in the U.S. bailout since it involves no real requirements that the banks use the money for lending.

"For the Treasury plan to work," Levine said, "one must have enormous faith and confidence in the ability of bank regulators to induce banks to lend in prudent ways. Given where we are today, I'm not sure such confidence is warranted."