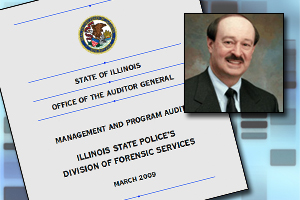 When the U.S. government hired Michael Sheppo to help eliminate a crushing backlog in untested DNA evidence, he had all the right credentials.

As one of the country's top forensic scientists, Sheppo served on the board of the nation's leading center for researching and teaching DNA testing. And during Sheppo's tenure as chief of the Illinois State Police crime lab, scientists there wiped out a backlog of 1,000 cases in little more than a year, according to lab reports.

But those reports were wrong. Far from being eliminated, the backlog still existed then and remains today. Now, almost three years after Sheppo took the helm of the National Institute of Justice's forensic science division, his old lab is under fire.

In March, a state audit (PDF) found that the lab reported bogus DNA backlog numbers during Sheppo's tenure and after. And a confidential inspector general's report (PDF), obtained by ProPublica, said the lab retaliated against two employees who'd criticized the lab over a no-bid contract with the Florida nonprofit where Sheppo sat on the board.

Allegations in the inspector general's report and audit were at the center of a state legislative hearing today in Springfield, Ill., where state police testified that they already had moved to fix problems at the lab and address the backlog.

The Illinois hearing comes amid continued complaints from crime victims that the federal government hasn't done enough to reduce a national backlog of at least 350,000 untested DNA samples from murder and rape cases. While untested samples sit on the shelf, violent criminals are free to strike again.

Sheppo is one of the federal officials responsible for tackling the backlog. The forensic division at NIJ, the research arm of the Justice Department, runs federal grant programs to pay for DNA testing and oversees the nation's crime labs.

In an interview Monday, Sheppo declined to discuss specifics in the audit. He said he could not comment on the inspector general's report because it is related to an ongoing lawsuit against him by the two lab employees.

Today, the Illinois lab's DNA backlog stands at 1,227 cases, according to a spokesman for the lab, not far from where it was in 2004, when citizen anger over the issue arose.

At the time, then-Gov. Rod Blagojevich declared wiping out the backlog a major priority. So the lab used about $2.6 million to hire and train 14 new DNA scientists that year.

Once they were hired, the lab sent them to the National Forensic Science Technology Center (NFSTC) in Largo, Fla., to be trained.

At the time the no-bid $750,000 training contract was awarded by Sheppo's lab, he had led the center's board of directors for seven years in an unpaid position.

Other states typically train their forensic scientists in-house, but Illinois lab officials said at the time that they lacked the space to train 14 people.

After the training, the lab realized it overpaid NFSTC by as much as $100,000, according to the inspector general's report. Instead of asking for the money back, the lab arranged for the center to keep it in return for consulting on the lab's backlog, the report said.

Because of his affiliation with the Florida center, Sheppo and deputies met to discuss whether there was a conflict of interest involving the contract. In a March 2004 e-mail, one state police official said it would be "in our best interest" to put the contract out for competitive bid, the inspector general's report states.

Andy Wist, a biologist who worked at the lab for 30 years, weighed in with an e-mail to a colleague, saying that going with NFSTC "would be a huge waste of taxpayers' money."

Wist and another lab employee, Richard Chaklos, sent a letter to the lab, arguing that the contract should have been openly bid, according to the inspector general's report. They said other companies, including one they recently started, could provide the same services as the Florida center.

Three days later, the state police's internal affairs office launched an investigation into Wist and Chaklos, the report said. Each received a 30-day suspension without pay for operating a company that "competed with the state police lab's services."

In response, Wist and Chaklos, who still works at the lab, filed a complaint against Sheppo that led to the inspector general's report. They also sued Sheppo and his deputies. A federal judge found that the lab violated Wist and Chaklos' First Amendment right to free speech, but ultimately dismissed the lawsuit.

In an interview, Sheppo declined to discuss the report's findings but said he told the inspector general that the training contract should have been publicly bid. According to the report, Sheppo said that when the lab was discussing the training contract, he removed himself from the process and did not know the amount of the award.

The report said he was not paid for his work with the Florida center, though he received about $5,000 in reimbursements for attending board meetings for about 10 years.

The inspector general concluded that Sheppo had a "glaring conflict of interest" and that the suspension of Wist and Chaklos by the state police was "retaliation" for criticizing the lab. The lab was ordered to reimburse Wist and Chaklos for their lost pay.

The report also criticized Sheppo for "failing to provide complete and truthful responses" during the investigation and recommended he be disciplined. But the state police never punished Sheppo, and about a year later, in late 2006, he left to take the job at NIJ.