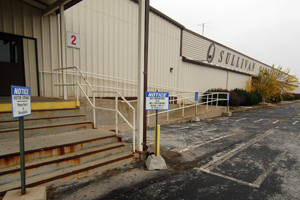 We start today, as we often do, with the latest must-read stimulus story from the Associated Press. The AP's Matt Apuzzo and Justin Juozapavicius examine the Obama administration's difficulty in using the stimulus to revive American factory towns. The two focus on the city of Lamar, Mo., where the closing of a local furniture maker in mid-2007 marked an early start to the recession, and where even the mayor had to file for unemployment when his store went out of business. "What work? Where?" says the mayor, when asked about the 640,000 jobs reported to have been created or saved by the stimulus.

The AP reports that just 2,500 of those jobs were in the manufacturing industry, and while towns like Lamar would likely have been worse off without the increased unemployment and Medicaid benefits included in the stimulus, those benefits "are harder to see than a job and a paycheck."

Over at The New York Times, the (weirdly anonymous) editors of the "Room for Debate" blog assembled a team of economists to discuss that old chestnut, "Did the stimulus work?" But don't hold your breath for a hard answer: the editors managed to find a "Yes," a "No" and two varieties of "Sort of." We're looking forward to the day when the Times launches a blog titled "Straight Answers from Economists."

Meanwhile, Paul Krugman writes that the so-far weak recovery argues for more stimulus, not less. This is a familiar argument, but Krugman adds an interesting twist: the claim that stimulus spending will lead to higher taxes down the road is "mostly wrong," he argues, since "spending more on recovery will lead to a stronger economy, both now and in the future -- and a stronger economy means more government revenue." The Reagan-era supply-siders made similar arguments about the benefits of lower taxes. We'll see whether Democrats buy Krugman's argument.

Computerworld is not a news source that often makes its way into our roundup, but today's story by Julia King merits a mention. King looks at the efforts of state governments to make their stimulus spending transparent. Just as the size of the stimulus is unprecedented, King writes, so are the reporting demands on state governments. For example, Iowa's chief information officer estimates that his organization spent 800 employee hours making the state's stimulus data available to the public. Given ongoing questions about the accuracy of the stimulus data released by the federal government, transparency efforts at the state level are worth watching.