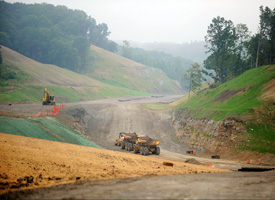 A small city in Ohio is demonstrating the law of unintended stimulus consequences. The Associated Press reports that Ohio is spending $150 million in stimulus money to complete a highway bypass around Nelsonville (population: 5,000), a project that will speed the drive along Route 33 from Columbus to Charleston, W.Va. But the bypass, which was begun in 2007 but stalled because of state budget problems, will also divert traffic away from the shops and art studios in the city's downtown. The state Department of Transportation has said it will install highway signs telling drivers about the alternative route through Nelsonville, a step that some merchants worry may not be enough to stem the likely decline in business from out-of-towners.

President Obama defended the "Buy American" provision of the stimulus package in talks with his Mexican and Canadian counterparts. Speaking from Guadalajara, Mexico, at the close of a two-day meeting with Mexican President Felipe Calderon and Canadian Prime Minister Stephen Harper, Obama said the provision, which says products purchased with stimulus funds must be made in the United States, has not damaged trade with the country's neighbors. (Canadian officials disagree.) Obama and Harper discussed ways for individual states and provinces to reach their own agreements, working around the Buy American provision.

It's official: Alaska will say yes to $28.6 million in stimulus money that former Gov. Sarah Palin vetoed. The Legislature voted 45-14 on Monday to override Palin's veto of stimulus dollars for energy efficiency projects. State Sen. Bill Wielechowski said rural Alaskans needed the money offered by the program. "We heard tearful pleas for help from the community," he said, according to the Huffington Post.