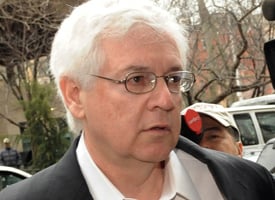 With some help from our colleagues at the Los Angeles Times, we've found some more information about the California activities of Hank Morris, the political operative who has been indicted on charges that he ran a multi-million-dollar pay-to-play scheme involving the New York state pension system.

We reported earlier that Morris had a connection with a California firm called Wetherly Capital Group, which split fees with Morris in two deals at the New York fund and three deals in California.

Wetherly is a placement agent -- a middleman who connects investment firms seeking money from pension funds with the pension staff and board members who make investment decisions. Acting as a placement agent is a legal business as long as a legitimate service, such as providing marketing or presentation advice, is provided. But Morris allegedly stepped over the line (PDF) by setting himself up as gate-keeper -- demanding cash and campaign contributions for access to the $122 billion pension fund.

Wetherly has not been accused of wrongdoing but is mentioned in the indictment charging Morris with bribery and money laundering as the source of $313,750 in payments described as "proceeds of criminal conduct." The investigation is being conducted by New York Attorney General Andrew Cuomo.

"Wetherly and its personnel have been fully cooperating with the attorney general's investigation," Wetherly spokesman Brian Maddox said. "There has been no suggestion that Wetherly or its staff engaged in any criminal wrongdoing or had any knowledge of improper conduct by Morris.”

Now, we've learned that Morris -- through his firm Searle & Co. -- earned fees from a $10 million deal in 2005 between the Los Angeles Fire and Police Pensions and Quadrangle Group, the hedge fund founded by Obama administration official Steven Rattner. Neither Quadrangle nor Rattner has been accused of wrongdoing, and the firm says it is cooperating with New York's ongoing investigation of Morris.

The California Public Employees' Retirement System also made a $100 million investment in Quadrangle in 2005. Neither CalPERS nor Quadrangle returned our calls seeking comment.

We also learned that Wetherly has direct links to Sean Harrigan, the former chairman of the CalPERS board. Harrigan retained Wetherly in 2006, documents filed with the Los Angeles Ethics Commission say.

Harrigan now sits on the Los Angeles Fire and Police Pension board, which made a $30 million investment with a Wetherly client in 2007. Harrigan recused himself from the vote. The fund had $13.6 billion in assets as of July 2008, the most recent report available.

Harrigan also has strong ties to the United Food and Commercial Workers union in California, where he was international vice president of the Western region until he retired in 2006. He continued to draw a $20,000 annual salary from the union until at least 2006, according to the union's Web site.

Wetherly and its clients have contributed nearly $200,000 to the union since 1999, according to the California secretary of state's campaign finance database.