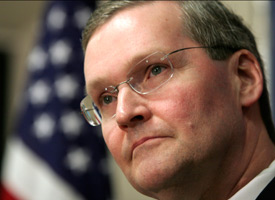 Today's indictment of Kevin Ring is full of details about his allegedly corrupt work with Jack Abramoff. But it is especially colorful in describing the relationship between Ring, Abramoff and Rep. John Doolittle (R-CA), who is identified as "Representative 5" in the filing.

The indictment (PDF) goes on for 13 pages detailing the dozens of gifts, fundraisers and free meals Ring and Abramoff provided for Doolittle and his staff -- and the legislative favors (earmarks in particular) provided in return. Doolittle's work was so extensive that he complained to his chief of staff in 2000 that he felt like a "subsidiary" of Abramoff's lobbying firm, according to the indictment.

Abramoff also made sure Doolittle's wife got a job -- working for Abramoff. From August 2002 through February 2004, Abramoff's firm paid Doolittle's wife Julie a total of $96,000. But Abramoff didn't want Doolittle's wife working too hard for her money, according to the indictment.

"I want her to help, but not be overburdened with work," Abramoff wrote to a consultant for a nonprofit Abramoff controlled in September 2002. He explained the next day: "I am not sure what role she should play and it does not have to be significant. She should just be helpful to you as you need her. I don't want her to do too much, though, since she has responsibilities at home as a mother and wife."

In March 2003, Abramoff canceled the "Spy Game Gala" fundraiser that Julie Doolittle had been working on. But she continued to receive $5,000 per month from Abramoff, "purportedly for 'marketing ideas'" for Abramoff's restaurant Signatures, the indictment skeptically notes.

As with many other guilty pleas and indictments emanating from the Abramoff investigation, the latest indictment is chock full of enthusiastic e-mails from staffers doing Abramoff's bidding. There is, for instance, Doolittle's communications director's e-mail to Ring in February of 2004. The staffer was helping Ring with tax legislation benefitting one of Abramoff's clients, according to the indictment, and e-mailed "Haha! Just earning my Sigs Sushi ;)...Keep it coming -- this is the fun stuff."

Sushi was one of the most popular items at Abramoff's restaurant Signatures -- Abramoff told Vanity Fair that ex-Rep. Bob Ney (R-OH), who's already served his time for corruption charges, was a "sushiholic."

Sometimes Abramoff's perks were not appreciated. The indictment notes that Doolittle's legislative director complained in September 2002 about tickets he'd received to a Washington Redskins game. There was no booze available, and it was "in a really low box in the end zone." Ring shot off an e-mail to Abramoff to ask if there'd been a "mistake."

In a statement, Doolittle's lawyer David Barger argued that the indictment only served to tar Doolittle and didn't prove any wrongdoing:

"It is clear that portions of the Kevin Ring Indictment were designed to make gratuitous references to the Congressman and his wife. This appears to have been done to titillate the public, with the foreseeable and therefore intended consequence of attempting to embarrass and pressure the Congressman.

"Not once in this document does the Department of Justice allege any sort of illegal agreement between Congressman Doolittle, on the one hand, and Kevin Ring or Jack Abramoff, on the other. To the extent the Indictment can be read to imply such an agreement, the Congressman continues to steadfastly maintain there was none and that he is innocent."