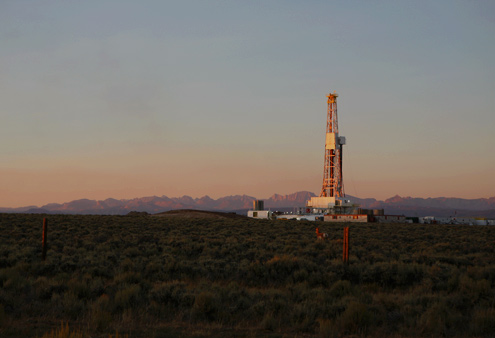 In a packed and sometimes contentious hearing on Capitol Hill Thursday, representatives of the oil and gas industry and their state regulators vigorously defended the practice of injecting toxic fluids underground without federal regulatory oversight.

The House Energy and Minerals subcommittee called the hearing to explore the economic and environmental risks associated with the practice, called hydraulic fracturing, after a string of reports of water contamination related to drilling across the country were reported by ProPublica. Hydraulic fracturing is currently exempted from the Safe Drinking Water Act, but both the House and Senate are drawing up legislation that would close the Bush-era loophole and reinstate the Environmental Protection Agency’s authority over the fracturing process.

The House version of the bill, which would also require drilling companies to disclose the names and amounts of the chemicals they inject underground, is expected to be introduced Tuesday.

In the hearing, industry-affiliated groups and an executive of Chesapeake Energy told the committee (PDF) that state regulations of hydraulic fracturing are sufficient and effective and insisted that the fracturing process and the chemicals it uses are safe. They said regulating the process under the Safe Drinking Water Act would add a needless layer of regulation that would cost billions of dollars and thousands of jobs.

But a close reading of the law shows that the Safe Drinking Water Act already defers regulatory authority over oil and gas drilling to the states and that reversing the exemption in question would mainly provide a baseline for best practices and give the federal government authority to investigate contamination cases or disastrous accidents.

“I frankly think the oil and gas companies have been running a scare campaign,” Colo. Representative Diana DeGette, a co-sponsor of the bill along with Maurice Hinchey (D-NY) and Jared Polis (D-Co) , said after the hearing. “I don’t know if the oil and gas industry doesn’t understand the bill or if they are intentionally misrepresenting the bill.”

Much of the debate centered on issues unearthed in a series of articles by ProPublica, which has been investigating natural gas drilling for the past year. The articles focused on numerous cases of drilling-related water contamination that have been documented across the country. In most of those cases, scientists at the Environmental Protection Agency have said that their investigations were hampered because the drilling fluids are largely kept secret and because the agency does not have authority to investigate whether hydraulic fracturing was indeed the cause. In one case, in Ohio, hydraulic fracturing was listed as one of the main causes leading to contamination and an explosion that ruined a house.

Among those who testified at the hearing was Scott Kell (PDF), the oil and gas regulator for the state Ohio and president of the Ground Water Protection Council, whose members include both industry officials and state regulators.

Kell personally conducted the Ohio investigation that named hydraulic fracturing as a contributing factor in water contamination there, yet Kell repeated the industry position that there has never been a single case of contamination in which hydraulic fracturing was proven to be the cause. Kell also introduced letters from state regulators in Ohio, Pennsylvania, New Mexico, Alabama and Texas refuting ProPublica's findings.

“The states have become aware of press reports and websites alleging that six states have documented over one thousand incidents of ground water contamination resulting from the practice of hydraulic fracturing,” Kell said. “Such reports are not accurate.”

In fact, ProPublica’s stories documented more than 1000 cases in which water was contaminated in the same places where fracturing takes place. In most of those cases the EPA said it was impossible to prove a link to fracturing because researchers don’t have access to the complete list of chemicals industry uses – without that list they say they can’t trace the contaminants to their source with certainty.

Officials in Colorado, where ProPublica reported that much of the contamination has occurred, did not issue such a statement refuting the articles.

When New Mexico Congressman Martin Heinrich spoke in the hearing, he sought to clarify New Mexico’s position and keep the hearing on course.

“We are trying to get at this from a standpoint of more science and less ideology; I know that’s difficult sometimes,” he said. “I would mention that while we had zero cases of usable ground water contaminated, we have a number of cases of surface water contaminated from products.”

When asked about the record of Chesapeake Energy, the nation’s largest independent gas producer, Mike John, a vice president of government relations for Chesapeake, told the committee that “I would emphasize that in my experience we have not seen any problems with hydraulic fracturing in my career.” John did not mention the recent Louisiana case in which 16 cattle died after allegedly drinking spilled fracturing fluids at a Chesapeake well site – a case that is still under investigation.

The hearing descended to rancor at several points, with proponents of regulation berating the industry for fighting regulation even as it insists that clean water is a priority, and with opponents expressing frustration over what more federal oversight might mean for their state’s economy, a signal that even in a Democrat-controlled Congress, legislation to regulate hydraulic fracturing may face a tough road.

"I am proud that I am supported by the oil and gas industry because they employ a lot of people in my state and I am going to stick up for them," said Rep. Dan Boren (D-OK). "I am sick and tired of a lot of folks in my own caucus coming after the largest employer in my state."