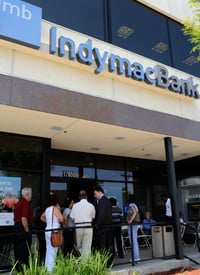 Last week's autopsy by the Treasury Department's inspector general of the collapse of IndyMac Savings and Loan offers insight into a Washington back alley brawl between banking regulators. The audit blasts the Office of Thrift Supervision, which serves as the primary regulator for S&Ls, for not taking a tougher enforcement stance on the bank. Until the OTS acted, the Federal Deposit Insurance Corporation, which operates the fund that pays for bank failures, could only stand by helplessly and watch.

In the debate over how aggressive regulators should be in examining troubled banks, it has usually been the FDIC against all comers. The other banking regulators tend to be more concerned about avoiding the disruption that comes from a bank failure than the FDIC, which has its insurance fund to protect.

"Tension between the FDIC and the OTS and the OCC [the Office of the Comptroller of the Currency] and for that matter the Federal Reserve has been there forever," says Ellen Seidman, a former OTS director.

IndyMac exposed the rift between the OTS and the FDIC when the OTS allowed the savings and loan to take extraordinary measures to stay afloat, and then failed to level with the FDIC about what it had done. The bank's failure cost the FDIC fund $10.7 billion.

Last spring, an OTS supervisor permitted IndyMac to count $18 million it received in May toward its regulatory filing for March. The money allowed IndyMac to claim it had a sufficient capital cushion and didn't need special permission from the FDIC to continue business as usual. Without that accounting sleight of hand, the bank would have fallen below the well-capitalized minimum threshold, triggering a ban on certain kinds of deposits absent an FDIC waiver. As a result, IndyMac earned a few more months of life before failing in July, a delay that cost both the FDIC and uninsured depositors tens of millions of dollars.

When Timothy Geithner became Treasury secretary, the director of the OTS, John Reich, sent him a letter explaining what had happened with the backdating (PDF). The letter included a chronology where Reich spread the blame. He suggested that a day after the OTS had allowed IndyMac to backdate the $18 million, the agency informed the FDIC, which did not object.

But ProPublica has learned that the OTS did not volunteer information about the $18 million. The FDIC learned of its existence only after it asked the OTS why IndyMac hadn't finished its financial filings for March. Even then, the OTS didn't disclose that the $18 million wasn't available in March, according to the FDIC. The FDIC discovered the truth after IndyMac failed and it took over the bank.

"[W]e were notified by the OTS on May 10th that IndyMac had an $18 million note receivable that was eligible to be included in their capital calculation for the first quarter of 2008," Andrew Gray, the FDIC's director of communication, told ProPublica in an e-mail. "The FDIC did not learn that there was in fact no note receivable until after the institution was closed on July 11, 2008."

If the FDIC had known that the bank had fallen below the well-capitalized threshold, IndyMac's ability to accept brokered deposits, known as "hot money," would have been at risk. Brokered deposits are gathered by intermediaries for investors and then placed in banks offering high interest rates in sums below the amount insured by the FDIC. The deposits can disappear as quickly as they come if the broker finds a better deal at another bank. IndyMac, in desperate need of capital, was addicted to brokered deposits. Between August 2007 and March 2008, IndyMac's brokered deposits increased from about $1.5 billion to $6.9 billion.

Reich tried to minimize the backdating incident by telling Geithner that it had "no effect on the ultimate outcome of IndyMac." IndyMac was already weaning itself off brokered deposits, Reich said, so it wouldn't have mattered if the FDIC had pulled the plug on them.

What Reich didn't mention in his letter was that IndyMac had supplanted brokered deposits with uninsured deposits, offering some of the best interest rates in the country in hopes of luring people trolling the Internet for investment opportunities. Without the backdated $18 million, IndyMac might have lost this flow of quick cash as well, because FDIC regulations forbid a bank that isn't well capitalized from enticing depositors with interest rates that are above normal in its market area.

IndyMac's net uninsured deposits increased by $91 million between the March 31 reporting period and June 30, the last reporting period before the bank failed. Those who flocked to IndyMac during this period lost most of their money above the $100,000 insured by the FDIC at the time.

Reich didn't offer much sympathy for those depositors. He told Geithner they were mistaken to look to regulators for guidance.

In his letter, Reich posed the question: "Are reports of regulatory capital intended to inform the public about the health of insured depository institutions?"

He then answered himself.

"When an investor uses regulatory information to decide whether to make an investment in an insured depository institution, a potential arises for misinformed decisions," Reich said. He went on to explain that because many regulatory actions aren't public, investors may be missing important details of what the regulators are doing.

According to the inspector general's report (PDF), the OTS should have designated IndyMac a troubled institution as early as May 2008. Yet the OTS did not issue any formal enforcement action against IndyMac until early July, just days before it failed. It downgraded the bank's rating to a level where the FDIC was able to take action on its own on July 1, at which point IndyMac lost the right to accept brokered deposits.

After the IndyMac scandal broke, Reich reassigned Darrel Dochow, the regional OTS director who approved the IndyMac backdating. Dochow's last day of work at the agency was Thursday. Reich's letter to Geithner revealed that Dochow's actions were not unique. Similar backdating had occurred in four cases in three different regions.

Last Friday, Reich retired, and perhaps spared himself from what would likely be an unpleasant grilling before Congress.

In June, a month before IndyMac failed, Reich testified before Congress (PDF) that while there might be a few financial failures in the months to come, "we expect these seriously troubled institutions to remain few in number and small in size." A string of spectacular financial collapses of OTS-regulated institutions soon followed, including the insurance behemoth AIG and Washington Mutual.

Asked about the shortcomings in the system revealed by the IndyMac backdating, the FDIC's Gray responded by e-mail, "We haven't publicly taken a policy position on this issue."

Yet the internecine war between bank regulators likely won't be lost on policy makers. Geithner's predecessor, Hank Paulson, called for abolishing the OTS, and several influential congressmen are floating the idea of a single banking regulator.

"We frankly need to do a better job on how we do bank regulation," said Seidman, the former OTS director. She thinks bringing the FDIC in on more exams would "probably be useful."